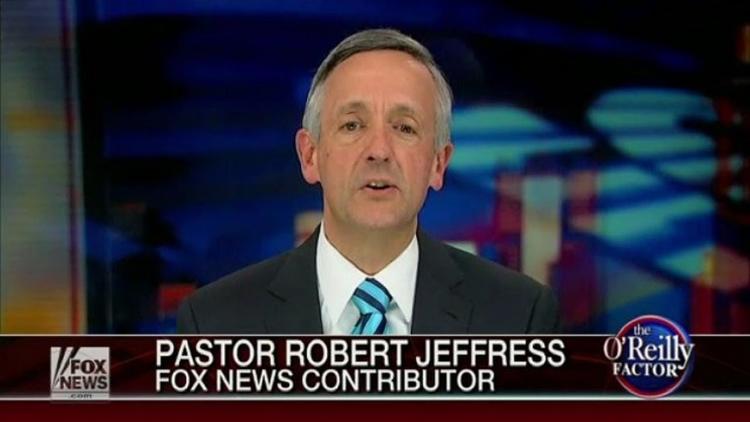 “”Fox News contributor Robert Jeffress believes that gay marriage and the film release of Fifty Shades of Grey are signs that the apocalypse is nearing. Jeffress said “the Bible prophesized that in the End Times, there will be a lack of moral restraint. And I think we’re seeing that manifested in so many different ways.”

Jeffress is an evangelical pastor with a long history of incendiary remarks. He is an anti-gay bigot who believes gays lead a “miserable lifestyle,” homosexuality is linked to pedophilia, and gay people are promiscuous and engaged in “filthy behavior,” and “brainwashing activit[ies].” He’s compared Mormonism to a cult, called Islam an “evil, evil, religion,” referred to Islam, Hinduism and Buddhism as “false religions,” andsaid the Catholic Church is a “counterfeit religion” that rose from a “cult-like, pagan religion.”

Despite Jeffress’ controversial history, cable news programs frequently host him and Fox News employs him as a contributor.

During a February 10 appearance on Fox News Radio’s The Alan Colmes Show, Jeffress said he saw “radical Islam,” gay marriage, and Fifty Shades of Grey as signs of the coming apocalypse.””