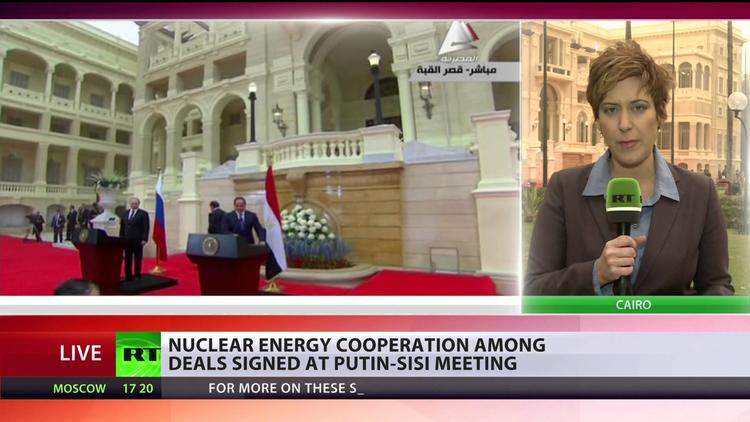 President Vladimir Putin of the Russian Federation paid a state visit to Cairo on Tuesday, consulting with President Abdel Fattah al-Sisi on a range of economic and foreign policy issues. The meeting was seen by many observers as underlining the desire of Egypt to become less dependent on the United States, and the desire of Russia to find new friends at a time its Ukraine policy has made it a pariah in Europe.

Al-Sisi told the Russian press that in the immediate aftermath of the July 3, 2013 ‘revolution’ Egypt wanted to develop its foreign policy. Among the bilateral issues al-Sisi raised with the Russians were these:

He got an agreement with the Russians whereby they will build a nuclear reactor in Dabaa in the northwest of the country. Egypt does not have much in the way of coal, trees or natural gas. In fact, solar energy makes more sense for Egypt than does nuclear, but apparently it is having trouble raising international funding for solar panels.

On Syria, al-Sisi warned of the dangers of Muslim radicalism. His fear of the Muslim Brotherhood and of the radical Muslim groups in Syria has led him to a de facto complaisance toward the Bashar al-Assadi regime, which aligns him more or less with Putin on this issue. When I was in Egypt last year, I read with astonishment a column in an Egyptian newspaper by a disciple of the president of Baathist Syria, Bashar al-Assad, which argued that authoritarian government could be successful.

Al-Sisi encouraged Russian tourism and investment, assuring his audience that Egypt is now secure. Tourism, a major earner of foreign exchange, accounts for 11 percent of the economy; some 10 million tourists came in 2014, up 64%. Some 3 million of them, nearly a third, were Russians. Earnings also improved somewhat in the past year (to $7.5 bn), but is still only 60% what it was in 2010 ($12.5 bn.). Al-Sisi is likewise eager for Russian investment monies to flow into Egypt.

Both Egypt and Russia in this trip were seeking to diversify their foreign policy so as to escape American hegemony.

This winter and spring, Russian tourists are being exempted from paying the $25 visa entrance fee, in recognition of the hardships the Russian public is enduring from the steep decline in the value of the ruble. Egypt is also exploring having Russian tourism packages paid for in rubles rather than dollars. Egypt could then use the rubles to import goods from Russia. this move is mainly driven by a desire to keep the Russian middle classes coming to Egypt on vacation, at a time when a weak ruble makes that trip much more expensive if denominated in dollars.

Some tourists are spooked by the violence in the Sinai Peninsula because several important resorts are located in that area, for instance at Sharm El Sheikh. To have Daesh (ISIS or ISIL) in the same neighborhood as their resort is nervous-making for tourists. Russian holiday-makers in Egypt typically prefer the Sinai resorts or those on the Red Sea, being interested in beach and surf rather than, for the most part, in Pharaonic antiquities. Al-Sisi’s overthrow of a Muslim Brotherhood government has made him unpopular in the Sinai Peninsula and has turned Some frustrated fundamentalists toward terrorism.