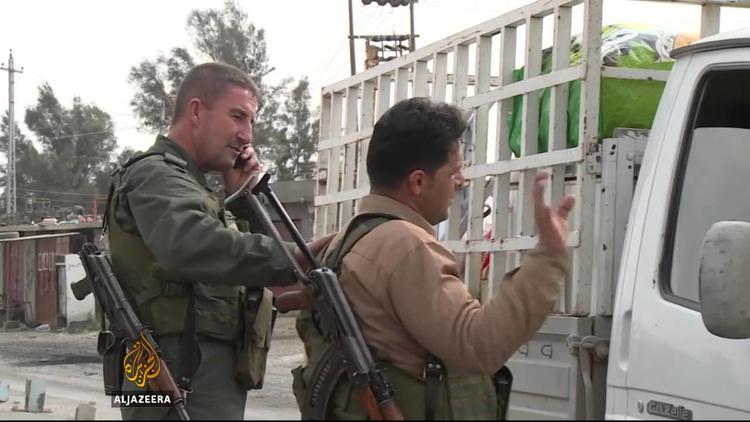 As extremists from the Islamic State group are slowly driven out of northern Iraq, members of one of the groups that suffered at their hands – the Yazidis – began to take revenge on locals they say collaborated with them. This week several villages were looted and burned with around 70 locals kidnapped or killed.

Earlier this week the people of Mosul and Iraqi Kurdistan woke to hear terrible stories about what was happening around 100 kilometres away from them in the villages of Sibaya and Al Jarua in the Sinjar area. An armed group made up of members from the ethno-religious Yazidi group and fighters from the Syria-based Kurdish Worker’s Party, or PKK, had surrounded the two villages and they began to wreak “revenge” on the people inside them.

The villages were mostly populated by local Arabs and the armed group felt that many in the villages were responsible for the mass killings, kidnappings and forced expulsion of the Yazidis in Sinjar. Witnesses say houses were burned and there was murder, kidnapping and looting; women and children tried to flee, screaming, and any fighting age men and youths were rounded up and taken away.

The Yazidis accuse the residents of these two villages of committing crimes against them and of looting their houses and Yazidi property after extremists from the Islamic state, or IS, group took control of the area in August. The IS group is made up of Sunni Muslim extremists, and is led mainly by Iraqi Arabs. The Yazidis say the Arabs in these villages collaborated with the extremists and the Yazidis have actually threatened to take revenge more than once already.

The Arab locals in the village deny these accusations, saying that anyone who collaborated with the IS group has already left town; they fled to Mosul after the area was taken back from the IS group by Iraqi Kurdish military.

Armed men entered the house and began firing their guns in the air, says one of the survivors of what some are already calling the Sinjar massacre. “They told me to take my daughter and go to the mosque but they said that my husband and our two sons had to stay in the house,” says Zahra, who wished to remain anonymous for fear of further reprisals. “I begged them to let me take the young boys with me too but they wouldn’t let and they started shouting at me.”

As she approached the mosque, Zahra saw many other women and children from the village. “We went to the leader while his fellow fighters were taking pictures of us with their mobile phones,” she explains. “He promised us that nobody would hurt us but then he said we should leave the village immediately.”

Zahra began to move out of the village. It was chaos, she says. And she recalls seeing that while locals were leaving, they were often stopped by armed men who took their jewellery. “One of them, who looked extremely angry, told us that any woman that doesn’t obey his orders will be stripped naked,” she told NIQASH.

Spanish news agency, EFE, reports that an estimated 1,200 locals were forced out of their homes at gunpoint and that most of them were members of “the tribal clans of al-Jahish”.

“A tribal conflict took place a few weeks ago between al-Jahish clans and Yazidi fighters, after both parties accused each other of causing the displacement of the Yazidi population,” the agency also reported.

Because of the smoke rising from the two towns, other nearby locals saw there was something going on. But when they tried to approach the villages the armed men fired their guns; ten of the would-be rescuers were wounded.

“The looting and the vandalism continued for two long days,” says Majid Ali, who lives in one of the nearby villages and who is also a member of the same tribe that was attacked; a third village was also attacked. “We saw how they robbed all the cars, took the livestock and anything they could move. Cars were being driven from the two Arab villages full of the things they’d taken,” Ali told NIQASH.

During one of the nights, some of the members of the tribe managed to get into the villages that were attacked. They found unburied dead – including women, children and elderly people who had been executed, then burned. The attackers hadn’t buried the dead because they were afraid of being attacked themselves, Ali says.

Two days later, things had became clearer. The number of dead in three neighbouring villages amounted to 25 and there were 50 missing locals, according to news published by one of the tribal elders on social networking pages.

News of the events began to spread. A delegation from the Ninawa provincial council visited the villages, accompanied by a military force from Iraqi Kurdistan.

“We listened to the testimonies of the victims’ families and we were able to see evidence of the looting in three of the Arab villages here from a distance,” said council member, Hosam al-Abar. “We agreed that the Iraqi Kurdish forces should impose a security barrier between the Arabs and the Yazidis here.”

The Iraqi Kurdish forces, known widely as the Peshmerga, also apparently managed to free about 30 women and children who had been kidnapped and taken to another part of Sinjar, Peshmerga leaders told locals they would stand by them.

Even so, only hours after the delegation had left a fourth village was attacked, Ali says. “But we decided to defend ourselves and we forced them to retreat.”

The fallout from the massacre saw Yazidi leaders, who have become responsible for parts of Sinjar newly liberated from the IS group, organized a meeting. They condemned the massacre and promised that such an act would never be repeated. They also said that the fighters who had carried out these acts were not able to be identified as they don’t belong to any of the known fighting factions.

The provincial council says that there are now around a thousand families who have left their homes and who are in need of shelter and aid. On the ground in the area are hundreds of armed men from the villages which were attacked, vowing to protect what is theirs should they be attacked again. In the middle are a handful of Iraqi Kurdish military. Right now things are relatively calm but if tribal justice – which calls for reparations and an eye for an eye – continues to be meted out, it is hard to say how long it will stay that way.

As for Zahra, she found shelter in the home of a nearby relative. But she couldn’t stand not knowing what had happened to her family whom she had left at the mercy of very angry fighters. So, still wearing the same black clothing she had on the night of the attack, she returned to her village to search for her husband and two young sons. She eventually found their burnt corpses in one of the houses in the village that had been set on fire.