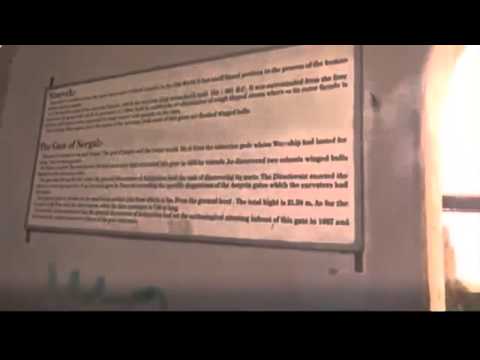 The Islamic State has posted a video online showing a group of militants destroying ancient statues and other artifacts, saying they are symbols of idolatry. Some of the objects date from the seventh century BC. Specialists say the damage is incalculable.

The video, which appeared online on Thursday, shows monuments and relics of the Assyrian era – including a winged deity – being smashed with sledgehammers and an electric drill. The militants placed the statues in a large exhibition room and shattered them on the floor, breaking the smaller sculptures to pieces.

The attackers do not state their location, but it is believed to be a museum in the northern Iraqi city of Mosul, which was seized by the Islamic State last June.

The statues, described by ISIS leaders as “idols,” and must be removed is a part of the militant group’s policy.

The militants belong to the strict school of Sunni Islam and attempt to destroy everything that is heresy according to their doctrine.

A man in the video says the Prophet Mohammed ordered to get rid of statues and relics, and that the objects are idols for Assyrians and Akkadians.

Some of the destroyed objects date back as far as the seventh century BC, and their historic value is immense.

The area controlled by the Islamists covers four ancient capitals of Assyria – Ninevah, Kalhu, Dur Sharrukin, and Ashur – which specialists fear could also be in danger.

The Assyrian Empire was one of the most powerful states of antiquity which rose around 2500 BC and occupied territory from the Mediterranean to the Caspian.

The barbarous act is the latest incident involving damage to cultural property in the Islamic State area. Last Sunday, the jihadists blew up the Mosul Public Library using homemade bombs. In January, the militants took all the books from the Central Library of Mosul, leaving only Islamic texts.

According to Axel Plathe – director of the Iraq branch of the United Nations Educational, Scientific and Cultural Organization (UNESCO) – the Islamic State’s damage to Iraq’s heritage can be described as an attempt “to destroy the identity of an entire people.” Plathe did not comment on the new video, saying it must be verified.