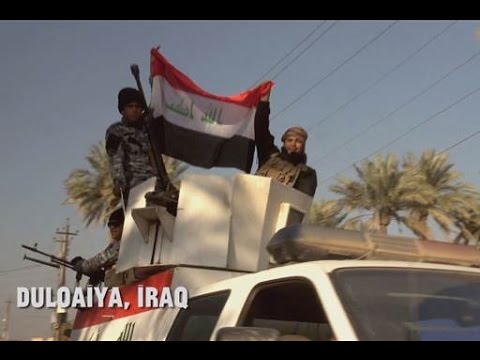 Iraq’s unofficial Shiite militias are an essential part of the fight against the extremist Islamic State group. But they act independently of the army, and are sometimes brutally murderous. Army officers now note that the militias have better weapons and better working conditions and that’s why their men are swapping teams.

There are no official figures as to how many Iraqis might be fighting with the Shiite Muslim militias, unofficial groups who have taken up arms to oppose the Sunni Muslim extremist group known as the Islamic State. But unofficial estimates suggest they number between 60,000 and 90,000 members altogether.

The relationship of the six main Shiite Muslim militias fighting in Iraq today to the Iraq’s regular army is a troubled one. In Arabic, they refer to the militias as “the popular crowd” and this “crowd” includes the League of the Righteous, the Badr Brigades, the Peace Brigades (formerly the Mahdi army), Hezbollah in Iraq, the Najbaa brigades and Harakat al-Nujaba, as well dozens of smaller groups who come under the alleged control of the larger ones.

Most of the new members of these militias are volunteers from the regular population who joined up after the highest religious leader for Iraq’s Shiite Muslims, the Grand Ayatollah Ali al-Sistani, called upon ordinary Iraqis to defend the country against the Islamic State, or IS, group in June last year. Al-Sistani later clarified his statement, recommending that anyone who wanted to defend the country do so in an official way, by, for example, joining the regular army.

“The popular crowd has better and more sophisticated weapons, an Iraqi army captain serving in the Salahaddin province, told NIQASH. They are also paid around US$600 a month, a salary that is equal to that paid to regular soldiers, he noted.

“They also have some US-made weapons, which they have from the government,” the captain noted. “The most prominent among these is the Steiner-scoped sniper rifle and the M16 rifle.”

The militias don’t usually have Hummer military vehicles or tanks such as those owned by the Iraqi army. They mostly use medium-sized pickup trucks to carry their weapons and men around. But these may well be more useful than tanks because a lot of the fighting between them and the IS group takes place, street by street, between buildings in residential areas.

“Everyone thinks that the Iraqi army is the main force fighting the IS group and that the Shiite militias support the army,” al-Saadi explained. “But the reality on the ground would suggest that the army doesn’t actually have any authority over these militias and that the militias make their own decisions.”

Additionally, the soldier says that the various militias don’t even work together. “The League of the Righteous won’t work with the Peace Brigades. Each group works separately and there have been conflicts arising in some areas about who is in control of what,” al-Saadi points out.

It is also an open secret that senior officers from the Iranian military are present in Iraq and working with some of the Shiite militias. Several of the militias’ leaders have a really good relationship with Iran, some of them have fought with, or been trained by, the Iranians – this includes Hadi al-Ameri of the Badr Brigades, Qais al-Khazali of the League of the Righteous and Abu Mahdi al-Mohandes of Hezbollah.

Colonel Jassim al-Mamouri says that the soldiers under his command in the province of Diyala are complaining about their jobs; he’s deployed in the Khales district there. Many of them would rather join the militias, he notes.

Militia members also have more sophisticated weapons and they get an unlimited amount of ammunition. His soldiers are only given 120 bullets and it’s hard for them to get more, al-Mamouri says.

However possibly the most important difference between the militias and the regular army is this: if a militia member withdraws from battle or makes a mistake, he will not be punished or subject to military discipline. Soldiers may lose their rank, have their salaries cut or suspended or be otherwise punished if they do something wrong. This difference makes the militia fighters behave in a very individualistic way and causes them to lose respect for the Iraqi army.

It is for all of these reasons that some of his men have resigned and joined the militias instead, al-Mamouri told NIQASH.

Meanwhile in Anbar, where most of the province is under the control of the IS group or their allies, the Iraqi army and Shiite Muslim militias are fighting to prevent the IS group from getting any nearer to Baghdad. But as army officer, Lieutenant Amjad Rahim, who is posted in Anbar told NIQASH, “they don’t trust us and they carry out their attacks on the IS group in secrecy, without telling us about the details.”

The militias have their own system of military intelligence as well as administrative systems and they prefer not to share any of their information with the Iraq army. In some cases they have not allowed regular soldiers to take part in certain battles and in other cases, they won’t even let the Iraqi army into areas they control.

Recent reports suggest that the militias’ independence is allowing them to take matters into their own hands when it comes to areas they have taken back from the IS group. There have been plenty of stories about the meting out of justice to locals the militias suspected of collaborating with the IS group.

This week, Reuters reported on a particularly heinous incident in Diyala where an estimated 72 unarmed locals were executed by what locals describe as a combination of militia and army personnel.

Locals say the uniforms the attackers wore seemed to be a combination of both forces and that Hummer vehicles – which the militias don’t seem to have – were on the scene. While some witnesses say they saw soldiers crying over the massacre, others described fighters wearing “green headbands emblazoned with the name Hussein, a defining figure in Shiite history”.

Another alleged part of the reason for the strength of the Shiite militias is their strong religious beliefs. Many of them apparently consider the war against the IS group as a sacred duty. They wear the aforementioned headbands and carry religious flags into battle; members of the militias are well known for their dedication to their cause, which sees them prepared to sacrifice their lives during sneak attacks – possibly more readily than the Iraqi army soldiers, many of whom are doing the job to make a living.

Despite all of the problems with the militias, officers in the regular army – including the three interviewed for this story – stress that the militias play an extremely important role in the fight against the IS group. It is hard to say whether the Iraqi army could have stopped the group’s advance without their help.

MSNBC: “On the frontlines fighting ISIS”