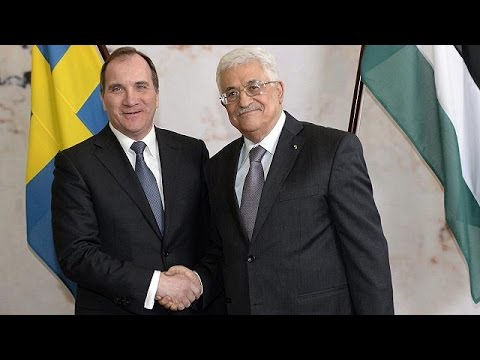 “The Palestinian President Mahmoud Abbas is in Sweden for talks with the country’s new Prime Minister Stefan Lofven.

It is his first visit to the Nordic nation since it “officially recognised Palestine”: …as a state. Sweden’s ties with Israel have nosedived however as a result with Tel Aviv recalling its ambassador to Stockholm.”

“The first-ever Palestinian embassy in Western Europe has opened in Sweden on Tuesday evening, the Swedish prime minister’s press service said. President Mahmoud Abbas has arrived in Stockholm for the event.

Prime Minister Lofven has vowed aid to Palestine, but has also called on reforms.

“There are challenges: we must help one another to fight corruption, increase gender equality, improve respect for human rights, and of course continue the state building process,” Lofven said.

Under the newly signed deal, Sweden’s financial help to Palestine will grow by 1.5 billion kronas (US$179.74 million) over the next five years.”