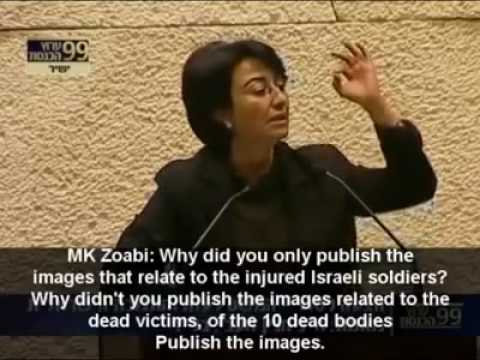 The Israeli central election committee, on Thursday, passed a vote to exclude Palestinian MK Hanin Zoabi from the Arab list of candidates running for Knesset elections, next March.

PNN reports that the petition was submitted by Avigdor Liberman, head of Yisrael Beytenu party, and Otzma Yehudit/Yachad, Ha’am Itanu candidate Baruch Marzel, over anti-occupation and apartheid remarks Zoabi made against Israel.

Lieberman’s party was recently the focus of a corruption probe within the Israeli political spectrum.

Originally under suspicion over charges of money-laundering and bribery, Lieberman was formally indicted in December of 2012, on lesser charges of fraud and breach of trust.

More recently, the Foreign Minister’s life was threatened with an assassination attempt.

Born in Moldova, Lieberman is one of the only foreign ministers in the world who does not live in territory officially recognized as his own country.

About 27 members of the committee voted for banning Zoabi, and 6 against. The vote was followed by a sharp debate.

In response, Zoabi said that she has called for popular struggle and not violence, adding that she will not retreat from her stand against Israeli oppression and siege.

If advocating murder was the criteria for being termed a terrorist, said Zoabi, it was the petitioners who deserved that title. “Those who do not condemn the murder of hundreds of children in Gaza is a supporter of terror,” she said.

“What bothers those who seek to ban me from running is the fact that I am a Palestinian and want to continue being a Palestinian, even in the Knesset.”

Zoabi, during the committee hearing, said that she was not the one that should be put on trial.

“The occupation is the source of all violence, and for those who did not notice, the two people who filed this petition are the ones who have turned my entire nation into terrorists.”

Zoabi over the years has openly opposed Israeli-occupation and terrorism, and the ethnic cleansing of Palestinians. “I certainly support any and all groups fighting the occupation, she once said in a Russian press interview.