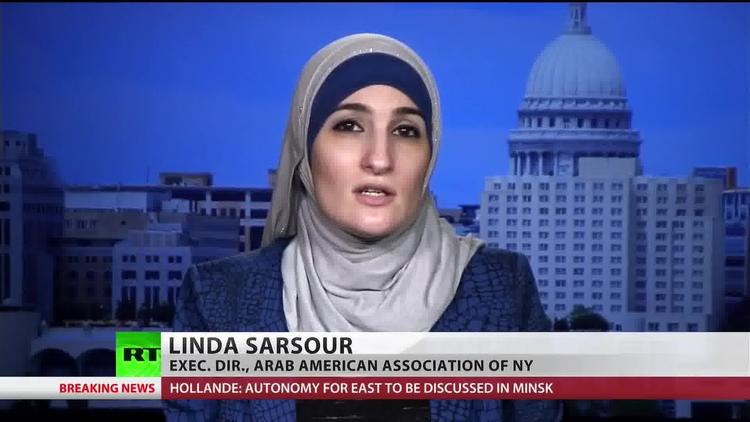 People from throughout the Triangle filled the UNC-Chapel Hill Pit Wednesday for the vigil for Deah Shaddy Barakat, 23, of Chapel Hill; his wife, Yusor Abu-Salha, 21; and her sister, Razan Mohammad Abu-Salha, 19, of Raleigh. They were shot and killed on Tuesday night. Photo Austin Root/UNC General Alumni Association.

A chill came over Chapel Hill last Tuesday night. In the hours after three young people were gunned down on a quiet cul-de-sac, temperatures dropped below freezing and neighbors wondered whether this liberal college town had become the latest symbol of a troubling growth of anti-Muslim intolerance in America.

The three victims — Deah Shaddy Barakat, his wife Yusor Abu-Salha, and her sister, Razan Mohammad Abu-Salha — were Muslim-Americans raised in nearby Raleigh, North Carolina. The two sisters were “muhajabah” — women who wear a headscarf as part of their religious practice. Barakat, who married Yusor two months ago, was a dental student planning a medical mission to Turkey to aid refugees from the Syrian civil war.

A suspect turned himself in: Craig Stephen Hicks, a neighbor. His Facebook account apparently railed against religion in general, not just Islam. Police indicated that he was upset about a parking dispute with the victims, but friends of the victims and their family say the suspect’s hostility went deeper than parking, and that he had threatened the victims several times.

If this turns out to be a hate crime, it would mark an ugly turn in the rise of intolerance toward Muslim-Americans. While the actions of a single individual doesn’t constitute a trend, surveys have found that Americans’ attitudes toward Muslims have grown increasingly negative in recent years. A majority still report favorable views of Muslim-Americans, but “unfavorable” responses are on the rise, driven by alarmist media reports about terrorist threats and political campaigns that treat all Muslims as untrustworthy. Survey respondents who watch Fox News or listen to talk radio regularly are 50 percent more likely than other respondents to express negative views of Muslims.

Hate crimes against Muslims have grown too. They still comprise a small fraction of all hate crimes in the U.S. — far fewer than hate crimes against Blacks, gays, and Jews, according to FBI data — but the proportion has risen from 1.8 percent in 2002-2008 to 2.4 percent since then. These figures would no doubt be higher if President George W. Bush had not visited a mosque in Washington days after 9/11, posing with Muslim leaders for photographs and expressing solidarity with Muslim-Americans. Perhaps the positive effect of that gesture is wearing off.

Today’s Republican leaders do not often emphasize the religious freedom of Muslim-Americans. Instead, they are more likely to express concern over “creeping sharia” — how exactly is a small minority going to impose Islamic standards on the rest of us? — and the threat of Islamic terrorism. A report issued this week by the Center for American Progress tracks the millions of dollars that right-wing groups have poured into scare campaigns, which have moved from the margins of our political system into mainstream media and major think tanks, as documented in a new book by my colleague, sociologist Christopher Bail. For its part, the Obama administration has chimed in with repeated alarms over violent extremism and the need for unprecedented intrusions on Americans’ civil liberties.

Despite these alarms, the actual threat posed by Muslim-Americans has been miniscule. On Monday, I released my annual report on terrorism cases involving Muslim-Americans. The report documents several dozen individuals who have joined insurgent groups in Syria over the past two years. But the number of plots against targets in the United States has dropped in recent years — last year’s total matched the lowest since 2008. These plots are predominantly small-scale, using handguns and knives rather than explosives, and generally so unsophisticated that the plans are often announced to community members who tip off the authorities, or on social media, where they are picked up by government surveillance.

The death toll from these plots stands at 50 fatalities since 9/11. Meanwhile, there have been more than 200,000 murders in the United States over the same period. There were more than twice as many fatalities from mass shootings in 2014 alone than from Muslim-American terrorist attacks over the past 13 years.

In other words, Islamic terrorism has not posed nearly the threat to public safety that many of us feared after 9/11. Yet American security policies remain frozen at the scale of worst-case scenarios that were developed in a different era, when the FBI feared that there might be hundreds of al-Qaeda sleeper cells in the United States. Over 13 years, the government’s dragnet has not turned up more than a handful of individuals who might fit this description.

Without a shift in public opinion, government officials seem unlikely to scale back our panicky security policies, for fear that they will be blamed for any violent incidents that occur on their watch. Yet public opinion is headed in the opposite direction.

At the murder scene in Chapel Hill yesterday morning, as I paid my respects to the victims, neighbors speculated about the motives for the crime. In the frost, we shivered at the thought that fear and hatred of Islam might have contributed to the deaths of three young Americans.