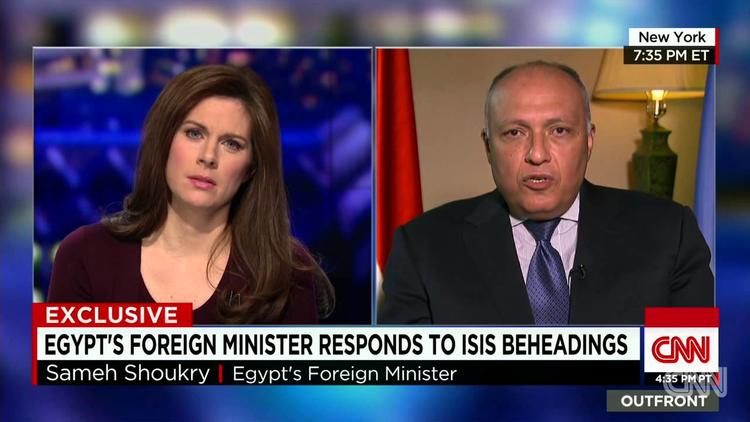 Egyptian president Abdel Fatah El-Sisi wants to rally the international community against terrorism in the Middle East. In a televised speech earlier this week he asserted, “Egypt and countries across the world are facing a fierce battle with terrorist organizations that adopt extremist ideology and share the same goals…It is high time we deal with them collectively without selectivity or double standards.” His remarks followed the release of the Islamic State’s most recent video-execution in which 21 Egyptian Christians were murdered with brutality now all-too-familiar to observers of recent events across the Middle East and North Africa.

That same day the Egyptian air force launched air strikes against Daesh (ISIL) targets in Libya, its first (publicly acknowledged) international military engagement since the Gulf War of 1991. The Coptic Church threw its support behind the bombing campaign, asking its followers to have “confidence that their great nation won’t rest without retribution for the evil criminals.” But is retribution indeed what Sisi and his military regime seek? And is concern over some 800 militiamen re-branded as Daesh in Libya truly driving Egypt’s first international military venture in nearly 25 years? A brief review of the president’s 18-month tenure suggests not. Rather, his military move aims to pit Egypt against a monolithic Islamist threat and allow the government to continue its harsh repression of domestic political dissent.

Sisi’s concern for the welfare of Christian Egyptians is dubious. Despite his call for a religious revolution for tolerance and an unannounced visit to Christmas mass at a Coptic cathedral in Cairo, the military strongman has yet to exhibit genuine concern for the interests and rights of Egypt’s largest religious minority. In June of last year a Coptic teacher was sentenced to six months in prison for “insulting Islam.” Just days later a Christian convert was handed a five-year sentence for allegedly falsifying information on discrimination against Egyptian Copts. Add to that the lack of Christian representation in the Egyptian military — the Supreme Council of the Armed Forces (SCAF) consists exclusively of Muslims — and it should be eminently clear that Sisi’s proposed “religious revolution” lacks substance.

So, although the president’s decisive response to the Daesh massacre in Libya sits nicely within the narrative of a progressive and tolerant regime concerned with the well-being of Egypt’s Christians, we must understand Sisi’s response politically. Indeed, through his intervention in Libya Sisi hopes to position himself as a regional leader in the fight against Islamism, and in doing so equate the dangers of the Islamic State with that of the greatest potential threat to his domestic political authority: the Muslim Brotherhood.

Following Sisi’s rise to power via military coup in June of 2013 Egypt experienced some of the most severe political repression in modern memory. Human rights observers described the situation as worse than that under the former dictator Hosni Mubarak. Members of the Muslim Brotherhood bore the brunt of this repression; in one day alone Egyptian security forces massacred at least 817 demonstrators protesting the ouster of Mohammed Morsi. The Egyptian government has since labeled the Brotherhood a terrorist organization and systematically denied the group any means of political participation.

How does this relate to the Egyptian military intervention in Libya? To return to President Sisi’s quote above: the world is at war, he maintains, with various terrorist organizations that “share the same goals.” We must combat them collectively, he contends, without exception or “double standards.” The implication is clear. By Sisi’s logic, the Muslim Brotherhood and the Islamic State are but two manifestations of the same radical Islamism which so gravely threatens the region (an argument which calls to mind Netanyahu’s warning to world leaders that “Hamas is ISIS and ISIS is Hamas”). The president’s fear mongering serves a dual purpose. Internationally, Sisi hopes to place the threat of the Muslim Brotherhood in the greater context of the war against IS, thereby justifying Egypt’s political repression (similar to the American Patriot Act post-9/11) and silencing international critics. Domestically, he hopes to capitalize on fear of the Brothe rhood to garner support and rationalize his Draconian policies.

Egypt’s military initiative in Libya is therefore a war of convenience. Retribution and national security aside, direct conflict with Daesh adherents in Libya aligns favorably with Sisi’s political interests. The Egyptian president will instrumentalize the conflict to bolster his image as a religious reformer and silence criticism of his repressive policies at home and abroad. Observers should be wary of allowing the Egyptian government to represent convenient political opportunities as principled stances against religious violence and extremism.