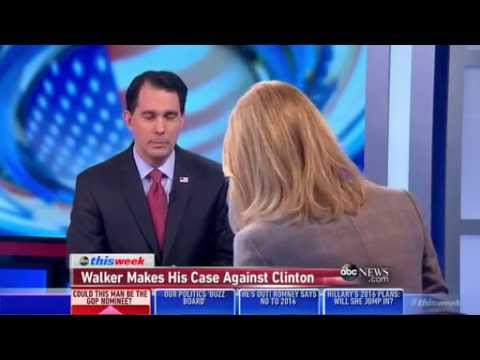 Likely Republican presidential candidate, Wisconsin governor Scott Walker, says he might favor sending US ground troops to mount a conventional war against Daesh (ISIL or ISIS) in Syria or at least wouldn’t rule it out.

Let’s see. The Bush administration invaded Iraq in 2003 on false pretenses of protecting Americans from a dire threat in the Middle East. Over 100,000 US troops were stationed in that country for 8 1/2 years and the US more or less ran that country during that period. Yet the US only succeeded in fomenting civil war and creating al-Qaeda in Mesopotamia, which morphed into ISIL or Daesh and then took over eastern Syria and north and western Iraq.

That is, a US military conquest in the Middle East left the region substantially more insecure and threatening to world order than it was beforehand. The US military does not for the most part know Arabic. They don’t know how to rule countries like Iraq or Syria and have no business, in international law, rampaging around invading them. The US was mostly clueless in Iraq and seldom controlled more than the land on which US troops actually stood. The 2006-2007 Sunni-Shiite civil war, which left tens of thousands dead and millions (yes) displaced and homeless, many to this day, was fought under the nose of 180,000 US troops. In many instances Iraqi political and militia leaders manipulated the US military into helping them disarm enemies (‘ those terrorists over there!’) and so aid the ethnic cleansing campaigns. The US military was helpless before the back-alley reprisals and faction-fighting.

Americans developed a myth that a temporary, minor troop escalation of 30,000 and some counter-insurgency measures worked to tamp down the violence. It is always all about us. But in fact, the ethnic cleansing of mixed neighborhoods just eventually ran out of steam. Shiite militias ran out of Sunnis to kill once most of them had fled the neighborhood for west Baghdad, Mosul or Syria and Jordan.

There is no prospect whatsoever that US ground troops could make the slightest difference to Syria’s civil war. And in fact, Daesh would gain enormous prestige by taking on the troops of the superpower on its own terrain. It would snipe them, set roadside bombs, ambush them, and capture, torture and humiliate them. And the resulting publicity (at which Daesh is very good) would attract fighters to their cause. Many Syrian rebels would rally around the newly anti-imperialist caliphate, and angry young men would flock there to take the Marines down a peg. We have seen this picture before, and have over 4,000 dead soldiers and some 30,000 more significantly injured to show for it. What we don’t have to show for it is a success in Iraq, and nor would we in Syria.

The US infantry is a blunt instrument. It can win against another conventional army. But it has seldom had much success in colonial guerrilla wars (and indeed no one has– the French lost Algeria and Vietnam, the British lost Kenya and India, the Italians lost Libya and Eritrea, etc., etc.) In an age of C4 plastic explosives, Manpads, TOW missiles, RPGs, etc., nationalist guerrillas given refuge by local populations can always take an unacceptable toll on a democratic government that undertakes a neocolonial adventure.

What is shocking is that the GOP hopefuls think that a ground war in Syria is an attractive campaign promise, the 21st century equivalent of a chicken in every pot. What will you and I gain from a Syria war launched by the leader of Wisconsin? What did we gain from the Iraq War? The latter impoverished us and made us less secure. We have a $6 trillion bill for Iraq (I thought these GOP types were fiscal conservatives who can’t find money for food stamps for half-starved American orphans; but magic, they suddenly have a $6 trillion war chest they intend to take from us in the form of taxes and curtailed services).

No doubt there are munitions firms and military sub-contractors who will make out like bandits from another war. And they are who Walker really represents (he is a notorious Koch brothers stooge). But is the American electorate really so clueless or chickenshit to fall for this nonsense yet again?