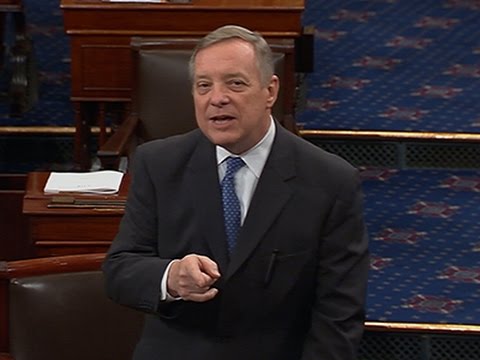 WASHINGTON — Democratic Party backers of a bipartisan bill requiring congressional review of a potential deal to limit Iran’s nuclear program are concerned that a Republican letter to Iran could hurt the measure.

“I think it raises real questions about whether there remains a bipartisan commitment to supporting negotiations,” Senator Chris Coons (Democrat-Delaware) told RFE/RL on March 10. “That concern may make it harder for there to be continuing bipartisan support for that bill.”

Senator Tom Cotton (Republican-Arkansas) and 46 Republicans sent an open letter to Iranian leaders on March 9 warning that any agreement could be revoked by a future Congress or president.

The White House reacted angrily to the letter. U.S. President Barack Obama accused the Republicans of siding with hard-liners in Iran, and U.S. Vice-President Joe Biden released a lengthy statement late on March 9 saying the senators’ letter was “beneath the dignity of an institution I revere.”

The White House threat is forcing Democrats to go against Obama. However, nine Democrats and one Democratic-leaning independent support the bill, making it close to getting a veto-proof majority of 67 votes in the U.S. Senate.

Two other backers of the bill said that it could make other Democrats more hesitant to sign on. “This had a lot of momentum in terms of getting bipartisan sponsors,” said Senator Tim Kaine (Democrat-Virginia). “Stunts like this that are super partisan…makes people more wary.”‘

“The danger is that it may poison the well and leave bipartisanship in tatters but I’m hoping we can stitch it back together,” said Senator Richard Blumenthal (Democrat-Connecticut).”It certainly increases the difficulty.”

Both said they were still supporting the Iran review bill despite the Cotton letter.

Senate Majority Leader Mitch McConnell (Republican-Kentucky) has agreed to hold off on a vote on the bill until after an upcoming deadline after Democratic backers objected to a vote that was scheduled to be held for this week.

Negotiators from six global powers and Iran are facing a self-imposed deadline at the end of March to reach a framework agreement and a June 30 deadline for a full deal.

The United States and the five other powers – Britain, China, France, Germany, and Russia — are seeking a deal with Iran under which Tehran would limit its nuclear program in exchange for sanctions relief.

Republican backers of the Iran bill dismissed the idea that Cotton’s letter would make passing the bill harder. Corker said, “Certainly there have been a lot of tensions, but hopefully we’ll move beyond that and be in a place where we can soberly and responsibly address whatever deal.”

He said he did not sign the Cotton letter because he “didn’t think it was going to further our efforts to get to a place where Congress would play the appropriate role that it should in the negotiations.”

Senator Lindsey Graham (Republican-South Carolina), who signed the letter and is a co-sponsor of the bill, said, “We’re going to vote. And I am confident that most Democrats will want to look at the deal before it’s binding.”

Iranian Foreign Minister Javad Zarif dismissed the letter as a “propaganda ploy” in another letter to Cotton on March 9.

He wrote the missive in hopes that it “may enrich the knowledge of the authors to recognize that according to international law Congress may not ‘modify the terms of the agreement at any time’ as they claim and if Congress adopts any measure to impede its implementation it will have committed a material breach of U.S. obligations.”