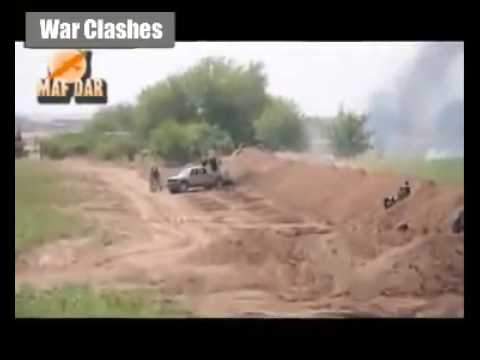 As the Syrian civil war drags into its fifth year, the al-Qai’da linked Nusra Front [Support Front] has a reputation as being among the toughest fighters and has consolidated its position on the Syrian scene. At the same time, there are hints that many Syrians living under its rule are tiring of its presence.

Nusra succeeded in securing control over most of Idlib province in northwestern Syria when it routed the Syrian Revolutionaries Front from Jabal al-Zawiya area in the far north of the province on the first day of November. In mid-February, Jabhat al-Nusra also captured the headquarters of the 7th brigade of the Free Syrian Army in A’ayn Larouz in Jabal al-Zawiya and arrested its leader, Abdallah Qantar. Last week, Nusra overran the Hazem Movement that was supported by the United States and that still had presence in the western parts of neighboring Aleppo province.

These developments sparked the anger of some Idlib residents who back the Syrian uprising but are unhappy with Nusra’s rule.

There have been, for example, around twenty protests across Idlib province since late December. For example, on December 28th, a major protest against Nusra erupted in Selkin, and the protestors demanded that Nusra fighters withdraw from the town and that they hand local administration duties to another conservative Islamist fighting group, Ahrar al-Sham. Nusra and Ahrar Sham have occasionally clashed in northwestern Syria, and Nusra has accused Ahrar al-Sham of being behind the Idlib protests.

Local activists, however, have insisted that they are protesting against Nusra’s brutal treatment of the population, especially of women, when trying to enforce Nusra’s strict interpretation of Shari’a laws. For instance, in mid-January, Nusra executed a fifty-year old woman in Selkin under the charge of adultery and corruption, and put the killing on YouTube. This caused widespread frustration among the population and the Free Syrian Army retaliated after a month by killing Nusra’s Emir of the city; his body was found in nearby Ma’arat Misrin.

Other protests have taken place in other Idlib localities. On January 23rd, people in the city of Ma’arat Nu’uman cheered for the Free Syrian Army and demanded the withdrawal of Nusra from all rural areas in Idlib. Similarly, protestors in Qalydin and A’ayn Larouz took to the streets several times during February and demanded the release of Abdallah Qantar and the mediation of Ahrar al-Sham. In Ellij, three protests since February 27th highlighted local demands that Nusra quit the village and release Abdallah Qantar. Furthermore, a Nusra checkpoint between Kafrouma and Haas was attacked and in the latter village the Nusra headquarters was burned on February 27th.

Protests against Nusra have also occurred in Hama province in west-central Syria. In the first week of March, at least four protests occurred in the villages of Kastoun, al-Zakoum and Zayzoun. Nusra accused the locals of conspiring against it and marchers later demanded that Nusra release several activists the Front had detained. In addition, the Hama villagers demanded Ahrar al-Sham to mediate with Nusra and help release Abdallah Qantar. Nusra hasn’t responded yet to these demands and popular frustration seems increasing.

Finally, there were anti-Nusra protests also in the south suburbs of Damascus where Nusra has a presence along with other less radical fighting groups. In Beit Sahem marchers have called Nusra, for several times since late December, to leave their district as well as nearby villages Babbila and Yilda. On February 1st, the protesters compared the Assad regime to Nusra and expressed their opposition. The latest protest took place on March 7th and Nusra fired at protesters to break their ranks and many were wounded. However, media reports emerged on March 12th suggesting that Nusra has finally withdrawn from the village.

It is still early to determine whether Nusra’s strong presence in northwest Syria is threatened or whether the anti-Nusra protests will intensify. Much will depend on the actions of the group itself. Nusra has an active public outreach campaign as well as a charity arm that has in the past helped its image, as has its fighting prowess. Interestingly, its response is less stern than that of the Islamic State towards protesters. Also notable is the popularity of Ahrar al-Sham, which is a Salafi fighting group that has avoided formal linkages to jihadi organizations. Sometimes Ahrar cooperates with Nusra and sometimes it combats it. These anti-Nusra protests merit continued attention, as they will give indications about the durability of jihadi groups in Syria.

Tony Ghazal Mouawad is Amb. Ford’s research assistant at the Middle East Institute, and a Masters candidate in the Middle East Studies program at the Elliott School of International Affairs.