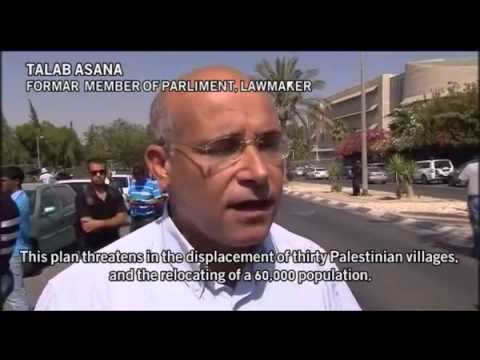 JERUSALEM (Ma’an) — Dozens of Palestinian Bedouins from the al-Jahalin community in eastern Abu Dis have received orders from Israeli forces to demolish their homes themselves.

The steel structures in which the community lives were put up nearby the Khillet al-Raheb area on which the Gateway to Jerusalem protest camp has been continually re-erected by activists in recent weeks.

The Gateway to Jerusalem was set up in protest to Israeli plans to displace Bedouin families from their dwellings in the corridor known as E1, between Jerusalem and Jericho.

Daoud al-Jahalin, the secretary-general of the Fatah movement for Bedouins of the al-Jahalin community, said that their homes are expected be demolished soon, as Israeli bulldozers have been razing lands in the nearby Gateway to Jerusalem camp for several days.

Al-Jahalin added that the Israeli civil administration department informed nine families who live in 14 steel structures that the demolition order would be carried out by Israeli forces if they do not demolish their own homes by themselves.

Between 50-70 Bedouins in the Khillet al-Raheb area have been living in these steel structures since 1997.

Shadi and Ayman Muhammad al-Jahalin are among those who received notices from the civil administration to demolish their homes, built more than 10 years ago and housing nine family members, according to al-Jahalin.

He said that the notices claim that the steel structures were built on confiscated lands and state property. The notices also indicate a court session to be held next Sunday.

The secretary-general emphasized that the Israeli side aims to empty the Palestinian desert of all its inhabitants in order to use the land for military purposes and to build settlements. This includes 22 Bedouin communities living on 62 percent of the West Bank’s areas of Jerusalem, Jericho, Anata, al-Eizariya, and Abu Dis al-Sawahreh, extending to the Dead Sea.

Al-Jahalin said that despite the fact the Israeli bulldozers razed these lands, residents will resume their strike that started 25 days ago.

Israel has demolished 562 Palestinian structures in the occupied West Bank since the start of the year, according to the Israeli Committee Against House Demolitions.

Last summer, Israeli authorities in the occupied West Bank released a series of plans that would include relocation of around 12,5000 Bedoin from the Jahalin, Kaabneh and Rashaida tribes to Talet Nueima. If the plan comes to fruition, the evacuation of the Bedouin tribes would free up additional lands for settlement construction, especially in E1, according to Israeli news source Haaretz.

Rights groups slammed the plans, adding that the forcible transfer amounts to a massive land grab and an attempt by authorities to annex the crucial E1 area and effectively cut the West Bank in two.

Palestinian Bedouins in the West Bank are largely composed of refugees of Israel’s 1948 ethnic cleansing of 750,000 Palestinians.