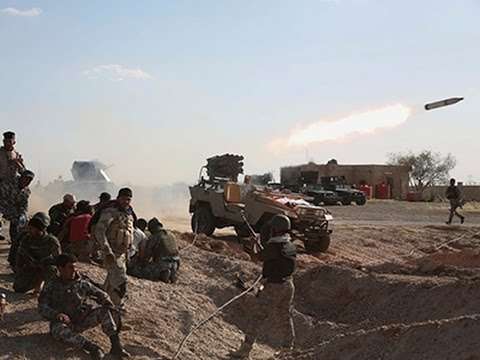 (Baghdad) – The offensive to re-take Tikrit from extremists seems to have stalled as troops surround the city but cannot go further. The same thing is happening elsewhere. And there are three main reasons why.

While stopped on the edges of the city of Tikrit, Captain Ahmad Mahmoud says he told the soldiers under his command about the battle of Stalingrad, which started in Russia in 1942 between the attacking Germans and the Russians during World War II and did not end until early in 1943. Despite the fact that the German army, led by Nazi commanders, had surrounded the city they were not able to take it from the Russians over months of prolonged, intensive and close fighting.

Mahmoud and his soldiers are part of a major military offensive in the province of Salahaddin which aims to take back territory currently controlled by the extremist group known as the Islamic State.

Earlier in March the Iraqi government sent the Iraqi army, alongside unofficial Shiite Muslim militias and with aid from local Sunni Muslim tribes, into the province of Salahaddin to take on fighters from the Islamic State, or IS. At first progress of the offensive, ostensibly the Iraqi government’s first major campaign against the IS group, was good and within a week the forces were able to re-take the areas of al-Dour, al-Alam and Albu Ajil. But when it comes to the major city of Tikrit, which has been mostly abandoned by residents to the IS fighters, progress has slowed.

And Mahmoud seemed to think the same thing was happening to the Iraqi army in Tikrit as had happened in Stalingrad. The city was surrounded but, as he told NIQASH during a telephone interview, “we are just not trained to fight this way, on the street. Even the Shiite militias, who are known for their street fighting skills, haven’t been able to break into the city and now the Islamic State is launching attacks on the surrounding troops, exhausting the men and inflicting casualties in a similar way to the Stalingrad scenario.”

When the Islamic State controls a city they immediately begin to protect the borders of the territory, planting improvised explosive devices on the roads and in houses, they deploy snipers and they prepare car bombs so they can detonate them if the area comes under attack. The IS fighters who escaped from the nearby towns under attack from the Iraqi army are now all thought to be in Tikrit, where they have organised themselves to hold the city. So far they have been successful in doing this – and they are also using the situation to attack Iraqi forces on the outskirts of the city.

Worryingly the same thing appears to be happening elsewhere too. In the province of Anbar, Iraqi forces have surrounded the smaller, strategic city of Karmah. The troops, some of whom were based in Baghdad, went into battle to try and ensure that the fighting did not get closer to the capital while the Tikrit offensive was on and they managed to capture areas around Karmah.

However due to fierce resistance from IS fighters inside central Karmah, the Iraqi forces were ordered to come to a halt and simply surround the city.

Similar situations have arisen in larger cities like Fallujah and Heet, where the Iraqi army has managed to surround the city but not been able to enter it. Basically it seems that the Iraqi army and their allies have been unable to take one major city back from the extremists so far – they’ve only been able to reclaim smaller towns that are more agricultural or tribal in nature.

Critics suggest there may be three main reasons for this lack of success. It is clear that the IS group has become skilled at street warfare, fighting from house to house and street to street – quite possibly skills their experienced fighters picked up in Syria. In order to defeat the IS group in this arena, there are three things needed that neither the Iraqi army nor the Shiite militias have. These are soldiers specially trained in urban warfare, intelligence and information from inside the cities themselves and the trust of the cities’ residents.

When it comes to urban warfare, the most experienced of the Shiite Muslim militias have done this before, certainly more than the Iraqi army has and in particular when they fought against US troops in Iraq after 2003 and then against other sectarian militias between 2006 and 2008.

“But the Islamic State outperforms us in one very important way,” says Abbas al-Saadi, a volunteer with a militia in Anbar province. “They have people who are ready to kill themselves. They fight very strongly and when they run out of ammunition, they blow themselves up.”

Al-Saadi says that the IS group also booby trap armoured military vehicles they originally stole from the Iraqi army to trick troops.

Intelligence from inside the cities is also in short supply mainly because, if the residents who were cooperating with the Iraqi army have not left for fear of being caught and killed, then they may well have been killed by the IS group.

“We used to have very good sources inside the cities controlled by the Islamic State,” one officer from Iraq’s Ministry of Interior told NIQASH on condition he remain anonymous. “We found out a lot about the Islamic State’s hiding places, their plans and their movements. But we have very few of these left now and most of the information we’re getting has been incorrect.”

It’s going to be tough to convince Sunni Muslim locals still living in the cities controlled by the IS group, an ostensibly Sunni Muslim group, to turn against the IS fighters. Reports about how the Shiite Muslim militias have treated locals in the areas where they drove the IS group out have reached these people and there are also a number of videos online showing Sunni Muslim houses being burned and residents being arrested; often local Sunnis consider the militias just as dangerous as the IS group. Human rights groups have released several reports on this issue and said that civilians should be protected from retaliatory attacks by pro-government forces.