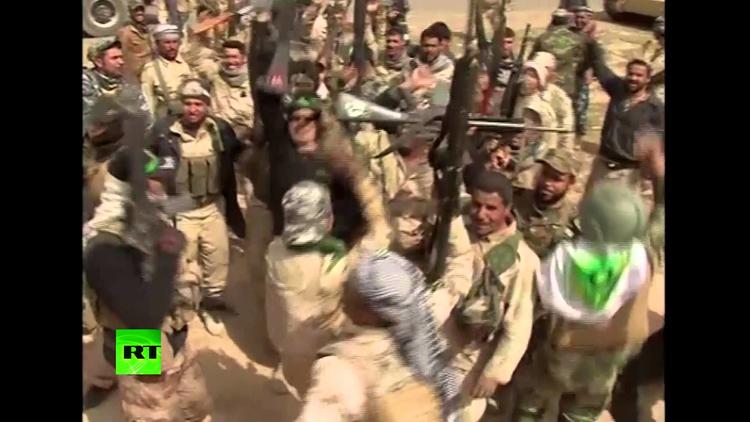 BAGHDAD/LONDON, (IRIN) – A week after launching a major offensive to recapture the city of Tikrit, pro-government forces in Iraq claim they are close to reclaiming large parts of territory held by militants from the group calling itself Islamic State (IS).

But for aid agencies the work in Tikrit is just beginning – with large numbers of people displaced by the violence, many for the second and third time, and in urgent need of food and shelter.

Security sources told IRIN that 146 families – around 900 people – displaced from Albu Ajeel and Al-Door districts in eastern Tikrit had gathered in Al-Mutasim, to the south of the city, and a further 462 families  – around 2,770 people – uprooted from across Salah al-Din were now in Samarra.

Some have been taken to one of two tented camps set up by the government, others are staying with relatives, but most are sheltering in mosques, schools and unfinished buildings.

Government employee Hani from Albu Ajeel told how he and his family had been held against their will by IS for two months and not allowed to leave their village, but last week were picked up by pro-government forces and taken to Al-Mutasim.

“There are tents and we were supplied with few things like food and blankets but it’s not enough, we need more,” the 43-year-old said. “We left everything behind, our homes, properties and we couldn’t bring a thing.”

Due to insecurity and limited access to many parts of Salah al-Din governorate, however, agencies are yet to carry out a full needs assessment and the UN’s Office for the Coordination of Humanitarian Affairs (OCHA) admits it does not have a clear picture of how many families have been displaced or to where.

“We don’t have any accurate numbers,” Jane Pearce, World Food Programme (WFP) representative in Iraq, told IRIN. “Teams were due to go in yesterday to do an assessment but they couldn’t get access.

“For now, all we can do is deliver food to where we know people are, and pre-position other supplies in Baghdad ready to be moved when needed.”

She said so far there had been “trickles” of families rather than large “waves” and teams were doing their best to distribute food to where it was needed, but the situation remained fluid and it was hard to know where people would come from or gather next.

The UN Refugee Agency (UNHCR), the UN Children’s Fund (UNICEF), the International Organization for Migration (IOM) and others are working with local NGOs to deliver relief items, including tents, plastic sheeting, water, jerry cans and mattresses.

Saad Bilal, an employee of the Iraqi Red Crescent, told IRIN: “Tents and electricity have been provided to the families as well as simple beds and blankets and food.

“[But]… we are expecting more IDPs in the future and we should be well planned and ready. With the continuous fighting it is not easy and there are obstacles to reaching people.”

At the start of the Iraqi government offensive on Tikrit, an operation heavily supported by Shia militias, there were widespread concerns from residents and rights groups that the mainly Sunni residents of Salah al-Din would be targeted by the militias due to IS also being Sunni.

Adnan, a 25-year-old teacher, who only gave his first name, told IRIN: “We are under the horns of dilemma: On one side we have IS and on the other these militias.

“IS accused us of being traitors and with the government and forced us to live under house arrest, and now the popular mobilization [militias] treat us as though we were protecting IS,” he said, claiming his family had been prevented from leaving the shelter site at Al-Mutasim.

But Hani said: “The Shiite militias treated us very well, unlike what we were expecting. They were the ones who moved us from our homes to the settlement at Al-Mutasim, but we just wish we could go back to our homes to resume our dignified lives.”

From January to June last year the province of Salah al-Din was a destination for IDPs fleeing violence in Anbar governorate, the first Iraqi territory IS fighters claimed.

But in June, within days of taking the city of Mosul in Nineveh, IS moved east and seized Tikrit, the birthplace of Iraq’s late dictator Saddam Hussein 150 km north of Baghdad, and the Baiji oil refinery, Iraq’s largest.

Although many people who had sought refuge in Salah al-Din have since moved, mostly to Kirkuk, Erbil and Sulaymaniyah in the semi-autonomous region of Kurdistan, according to IOM as of December last year the province was still hosting more than 50,000 IDPs.

A large portion of the population of Tikrit left the city when IS arrived, but due to the area being so inaccessible, little is known about how many families remained, or the conditions they have lived in since June last year.