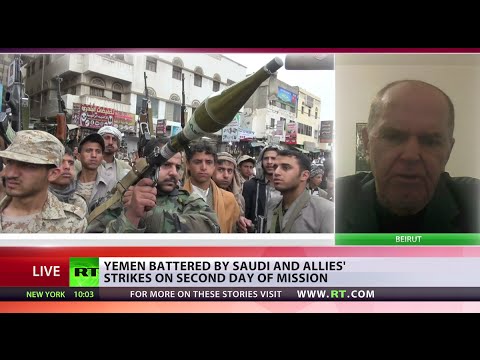 Hasan Nasrallah, the secretary-general of Hizbullah, Lebanese Shiite party-militia, weighed in on Friday on the Saudi intervention in Yemen.

The Saudis put together a Sunni coalition against the Shiite Houthis and have bombed Zaidi Shiite population centers like Sa’adeh. I discussed their motives in my just-published piece in The Nation.

Hizbullah is opposing Saudi policy in Syria effectively, having intervened on the side of Bashar al-Assad, whom the Saudis are hoping to see overthrown. Hizbullah punches above its weight. Lebanon is a small country of 4 million. Shiites are about a third or 1.3 million. Not all Lebanese Shiites support Hizbullah, which has a few thousand fighters. But they managed to shore up the Syrian government where the Syrian Arab Army could not. Hizbullah is closely allied with Iran.

Nasrallah said that the Saudis are engaging in propaganda when they claim to be supporting the elected president, Abed Rabbo Mansour Hadi. He said that Mansour Hadi had in fact stepped down from his job, and wondered if the Saudis would go around restoring other former presidents, like Tunisia’s Zain El Abidine Ben Ali, to power. He teased Riyadh that King Abdallah opposed all the Arab Spring revolts and wanted to put the genie back in the bottle. (While it is true that Mansour Hadi resigned, he resigned because Houthi tribesmen were telling him what to do and he was a prisoner. He escaped to Aden in the South and now to Riyadh in Saudi Arabia. Nasrallah is doing propaganda here in glossing over Houthi dictatorship.)

Second, he said, the Saudis maintain that the Houthi movement is an enemy of Saudi interests. But, he said, the late King Abdallah had found it possible to do deals with them. A Houthi delegation came to King Abdallah’s funeral. Shortly thereafter, the new king, Salman, decided to turn on them and go into Yemen, Nasrallah alleged.

Third, he said, the Saudis maintain that Yemen under the Houthis has become occupied territory, with Iran being the occupier. But, he asked, where are there any Iranian military bases or other signs of occupation in Yemen?

Nasrallah called for peaceful negotiations among the principle parties to find a solution to Yemen’s conflict.

At the same time, Sunni leaders in Lebanon praised the Saudi intervention, as did the leader of the largely Sunni Future Party there, Saad Hariri.

This conjuncture points to increased tensions between Sunnis and Shiites inside Lebanon. They were already divided over Syria, with Shiites mostly supporting al-Assad and Sunnis mostly seeking his overthrow.