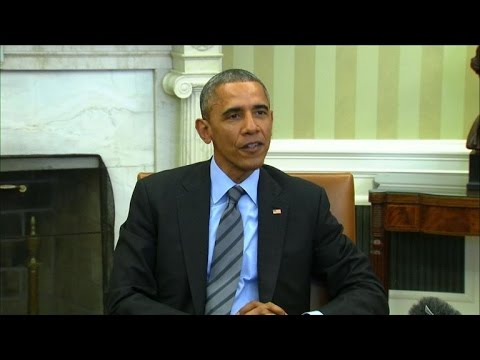 47 GOP senators sent a letter to Iran on Monday warning that country that any agreement only signed off on by President Obama might not last longer than his last day in office. This intervention of the senate in a foreign policy matter is not, as some observers are saying, “unprecedented.” Congress refused to ratify the treaty presented to it By Woodrow Wilson in 1919, that involved joining the League of Nations (the predecessor of the United Nations). In the late 19th century, Arthur Schleslinger, Jr. pointed out in a Foreign Affairs article in 1972, the Senate for twenty years declined to ratify any treaty at all, and contemporary observers became convinced that it would never do so so again.

Of course, there is a difference between refusing to sign off on a president’s treaty and inserting the legislature into the negotiation directly, while it is going on.

President Obama objected, saying, “I think it’s somewhat ironic to see some members of Congress wanting to make common cause with the hardliners in Iran. It’s an unusual coalition . . .”

And, of course, Obama is right that the right wing of the Republican Party has things in common with hard liners in Iran.

1. Many Republicans in Congress oppose abortion even in case of rape or incest. As I observed in a classic Salon article years ago, that puts the GOP right (exemplified by Sarah Palin) in the company of the clerical Guardianship Council in Iran:

“Palin’s stance is even stricter than that of the Parliament of the Islamic Republic of Iran. In 2005, the legislature in Tehran attempted to amend the country’s antiabortion statute to permit an abortion up to four months in case of a birth defect. The conservative clerical Guardianship Council, which functions as a sort of theocratic senate, however, rejected the change. Iran’s law on abortion is therefore virtually identical to the one that Palin would like to see imposed on American women, and the rationale in both cases is the same, a literalist religious impulse that resists any compromise with the realities of biology and of women’s lives.”

2. Many Republicans in Congress say they do not believe in evolution. Actually in this regard they are closer to Saudi Arabia than to Iran. Evolutionary theory is taught in Iranian school textbooks. But the textbooks carefully avoid discussing human evolution, very likely out of fear that it would prompt a backlash from Shiite fundamentalists. Ironically, the same compromise is made in Israeli schooling, for fear of the Orthodox.

3. Both the GOP and Iran hardliners have a fascination with foreign military entanglements. Republicans in Congress mostly say that President Obama is at fault for withdrawing US troops from Iraq in December, 2011, and that he should have kept a division in that country (they ignore that the Iraqi parliament refused to allow the troops to remain and that George W. Bush had failed to gain such an agreement). Iranian hardliners also see a national interest in having troops in Iraq, and special operations forces of the Iranian Revolutionary Guard have been detailed to stiffen the resolve of the Iraqi army and to coordinate with Shiite militias. Ironically, since President Obama has sent 3,000 US troops back into Iraq as advisers and established a command, both the Republicans and the Iranian hardliners have gotten their wish, of forces stationed in Iraq. And ironically, the two are de facto allies in the current struggle against ISIL, though neither side would admit it.

4. Many congressional Republicans are strong partisans of nuclear energy and dismiss environmental concerns about nuclear waste. The hardliners in Iran have insisted on expanding Iran’s system of civilian nuclear reactors and enriching fuel for them in-country. Some ten reactors are now planned.

5. Both the US GOP and the Iranian hardliners are opposed to the P5 + 1 (permanent UN Security council members plus Germany) negotiations over Iran’s enrichment program. The Republicans want the unrealistic goal of no enrichment by Iran. The Iran hardliners want enrichment without international restraints, though they say they do not want a nuclear weapon. Rather, they are functioning as nationalists, insisting that Iran is an independent country and has every right to do what South Korea and Japan do every day. Like the GOP hardliners, the Iran hardliners have tried on several occasions to derail the negotiations. Last fall they accused President Hasan Rouhani of being too accommodating of the “American wolf,” saying he needed to speak to Washington “from a position of strength.” Friday prayer leaders slammed Foreign Minister Mohammad Javad Zarif for talking a walk at Vienna with Secretary of State John Kerry, saying he was way too friendly with an official of a country that backed Iraq’s Saddam Hussein in his 8-year aggressive war on Iran in the 1980s.