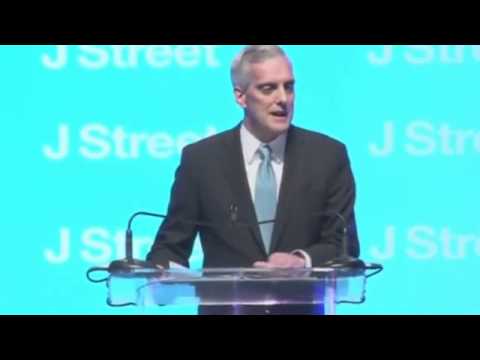 US officials continue to maintain that American policy towards Israel will undergo changes in the wake of pre-election comments made by Prime Minister Benjamin Netanyahu, in which he stated that no Palestinian state would be established on his watch.

“Israel cannot maintain military control of another people
indefinitely,” he said. “An occupation that has lasted
for almost 50 years must end, and the Palestinian people must
have the right to live in and govern themselves in their own
sovereign state.”

McDonough reiterated America’s long-standing support for a
two-state solution to the impasse between Israelis and
Palestinians – an agreement that would be based on 1967 lines and
include mutually agreed land swaps. However, he said Netanyahu’s
comments have cast doubt upon Israel’s commitment to such an
agreement, despite the prime minister’s attempts to backtrack in
the wake of his re-election on March 17.

“We cannot simply pretend that those comments were never
made, or that they don’t raise questions about the prime
minister’s commitment to achieving peace through direct
negotiations,” McDonough told the crowd, as quoted by
the Guardian.

According to Haaretz, McDonough – one of Obama’s close advisers –
did not detail just how US policy would change over the coming
months, but he did reject the notion that US reaction to
Netanyahu’s comments is based on personal feelings of anger.
Netanyahu has had a troubled relationship with President Barack
Obama since he came into office, and the White House was widely
believed to have preferred a new leader to take the reins in
Israel.

McDonough said US commitment to Israel’s security and military
will remain. Several reports over the past week have suggested
that the US could stop shielding Israel from resolutions at the
United Nations that seek to recognize a Palestinian state or
outline the parameters of a two-state deal.

Meanwhile, in an interview with Israel’s Army Radio, US
Ambassador to Israel Dan Shapiro also said America’s approach to
the country would be re-evaluated – again pointing to Netanyahu’s
comments.

“This was not Israel’s stance until those comments. It is
confusing and raises doubts regarding Israel’s true stance,”
Shapiro said, as quoted by Jewish news website JP Updates. “The question we are still
focusing on is how to progress towards the solution of two states
for two nations.”

“I cannot deny that we have serious issues with some
statements said during the elections season. One of them is the
shirking of a ‘Palestinian’ state. We believe that it is the only
solution that will safeguard a Jewish and democratic Israel.
Netanyahu said that he will not lend a hand to the establishment
of a ‘Palestinian’ state so long as he is Prime Minister,”
Shapiro said.

Netanyahu has tried to walk back multiple comments since his
victory last week. He has denied changing his position on
Palestinian statehood, saying he actually meant that he doesn’t
believe the possibility for a Palestinian state exists in the
current political climate. Israeli Ambassador to the US Ron
Dermer also said that Netanyahu’s comments were misinterpreted.

In an interview with The Huffington Post, President Obama himself
stated that change could be coming, adding that the US is
“evaluating” its policy based on the prime minister’s
statements.

“We take him at his word when he said that it wouldn’t happen
during his prime ministership, and so that’s why we’ve got to
evaluate what other options are available to make sure that we
don’t see a chaotic situation in the region,” Obama said.

“We can’t just in perpetuity maintain the status quo, expand
settlements. That’s not a recipe for stability in the
region.”