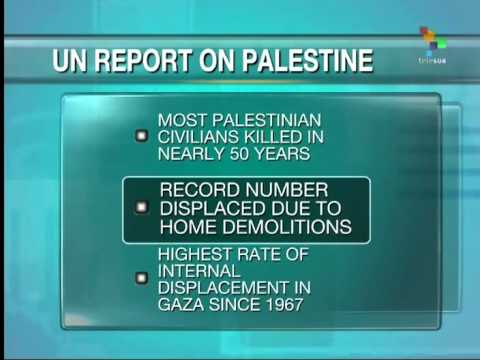 UNITED NATIONS (IPS) – In 2014, the ongoing humanitarian crisis in the occupied Palestinian territories (oPt) saw the worst escalation of hostilities since 1967, said a report by the United Nations Office of Coordination and Humanitarian Affairs (UNOCHA), released on March 26.

The report, Fragmented Lives, said that the Gaza strip’s 1.8 million civilians were directly affected by the war. Over 1,500 were killed, more than 11,000 injured and 100,000 remain displaced. Meanwhile, settlement expansion and the forced displacement of Palestinians in Area C and East Jerusalem are continuing.

“The crisis stems from the prolonged occupation, and recurrent hostilities, alongside a system of policies that undermine the ability of Palestinians to live normal, self-sustaining lives and realize the full spectrum of their right to self-determination,” the report stated.

UNOCHA, who have detailed key humanitarian concerns in the oPt for the past four years, reports that about 4,000,000 Palestinians in the West Bank and the Gaza strip remain under an Israeli military occupation that prevents them from exercising many of their basic human rights.

The U.N. Resident and Humanitarian Coordinator for the territory, James Rawley, told U.N. media that the economic and social problems are expanding from Gaza to East Jerusalem.

“A record number of 1,215 Palestinians were displaced due to home demolitions by Israeli authorities, while settlement and settler activity continued, in contravention of international law, and contributed to humanitarian vulnerability of affected Palestinian communities,” he noted.

The report was released on the same day as Robert Serry, the U.N. Special Coordinator for the Middle East Peace Process, briefed the U.N. Security Council about peace negotiations.

Nearing the end of his mandate, Serry expressed his disappointment at the failure of the negotiations between Israel and Palestine. Serry pointed out that a two-state solution cannot be forced by the international community, but can only succeed if both parties are willing and committed to such a peaceful solution.

“I must tell you, I am disheartened by seeing what has happened in these seven years, and these past three negotiations. If the parties wish to live in peace with each other, then there is no other alternative, and it is time to really think of a two state solution,” Serry said in comments to the press.

Serry urged the Security Council to revive talks, saying a greater focus should be put on Gaza.

“Gaza first, doesn’t mean Gaza only. But I don’t see how, this shattered piece (of land) can be ‘pieced’ together without addressing it now as a priority issue.”