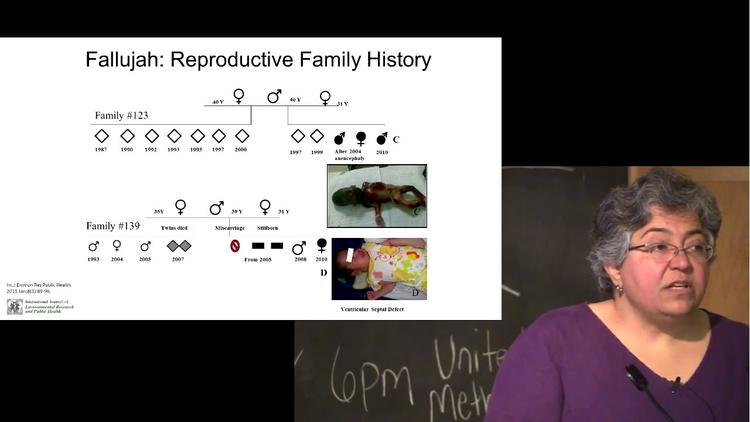 The Iraqi people, once the envy of the Arab world for their outstanding educational and health-care systems, have been reduced to a nation of refugees, flung across the Middle East. U.S.-created thugs are axing Iraq’s historical heritage into pieces. The Iraqi health system continues to disintegrate as doctors flee and supplies dwindle. Maternal-child health, which is an indicator of a nation’s overall health, has plummeted in Iraq and is now among the worst in the world.

Under these conditions, Iraqi cities are grappling with cancers and birth defects. These epidemics are too widespread to be tackled by a collapsing health-care system.

Decades of U.S. coups, invasions, and debilitating sanctions has brought large sections of the Middle East to the brink of a total collapse. In Iraq after the Gulf War, thirteen years of sanctions killed over half a million Iraqi children while unknown numbers of children suffered irreversible developmental, physical, and mental damage. Recent declassified information reveals that the harmful public health consequences of sanctions were fully known to the American perpetrators.

Iraq was hit with crippling sanctions and military attack from the United States, starting in 1990/91. At that time, the U.S. targeted Iraqi hospitals, electric utilities, schools, factories, water treatment plants, irrigation systems, food storage facilities and community health centers. Yet far worse was to come: the 2003 invasion of Iraq.

In 2003, any surviving Iraqi infrastructure was destroyed by the U.S.-led invasion. Again, water treatment plants, electricity generating plants, and sewage treatment plans were repeatedly bombed and destroyed by the U.S. and its allies. In a chaotic Iraq, Saddam, formerly a favorite of the U.S. government, the man whom the U.S. helped gas Iran, was savagely killed and Iraq was plunged deeper into chaos.

Almost Some estimates for how many Iraqis died under American occupation run as high as a million.

Lesson learned: the U.S. presence in Iraq was synonymous with societal death. As in previous occupations, the U.S. created a power vacuum and spurred opposition to its occupation, thus causing to coalesce the most barbaric forces in the area. The trained killers of al-Qaeda and ISIL have smothered civil society in Iraq and Syria. Public discourse has all but vanished. Through constant battering from the United States and its allies, a growing mass of the Middle East has been transformed into a starving, terrified population. This population is constantly driven from one burning border to the next, from the grip of one brutish gang to the next.

The health crisis is also pressing but gets far less press attention than ISIL. Dramatic increases in birth defects and cancers are reported in cities like Fallujah, Hawija, and Basra which were “pounded” repeatedly by U.S. forces. Our initial research in Iraq confirmed public contamination with lead and mercury, two potent neurotoxic metals. Public metal contamination coincided with increases in birth defects in Basra and Fallujah.

Our most recent investigation in Iraq focused on Hawija, a small city of 40,000.  A girls’ school in Hawija was seized and converted to a U.S. military base in 2003. Physicians in Hawija had been noticing a visible increase in neurodevelopmental disorders in the children shortly after the U.S. base was established.

We discovered public contamination with toxic heavy metals in Hawija. Titanium, a favorite metal of the weapons industry, was shockingly high in the hair of Hawija children with neurodevelopmental disorders compared to Iranian children living across the border. U.S. soldiers, exposed to burn-pit emissions, returned from Iraq (and Afghanistan) with respiratory illnesses and with high levels of titanium in their lungs.

Burning waste in open-air burn pits on U.S. military bases was a common practice from 2003 to 2010. Over 500 military bases were functioning in Iraq at the height of the invasion. Mixed waste was continuously burnt in large pits, some as large as an acre for 7 years. This practice released large volumes of highly toxic metals and other air pollutants into the Iraqi environment. U.S. Army medical officers have confirmed that Iraq dust contains "37 metals that have been linked to everything from neurological disorders to cancer".

A 2011 Institute of Medicine (IOM) report acknowledges that cumulative exposure to burn-pit emissions is associated with log-term health damage to normal adults.

Pregnant mothers, neonates and growing children are highly vulnerable to toxic exposures. This fact is well-known to science. Occupied Iraqis endured a longer exposure time and many were exposed at the height of their sensitivity. The IOM claims to “not shy away from making honest calls and from demanding the most from [U.S.] leaders”. Therefore we must ask why the IOM failed to express any alarm at the impact of burn-pit emissions on the most vulnerable Iraqis.

Our IOM colleagues were duty-bound to disclose the fact the exposure to bun-pit emissions is multiple times more dangerous for Iraqi mothers and growing children than for U.S. soldiers.

After all, doesn’t all life have equal value?

No doubt, U.S. military practices in Iraq, including persistent bombings and destruction of health care infrastructure, is at the core of the current Iraq health catastrophe. What is more, the U.S. destruction of Iraq’s health system continues today. Fixing the damage in Iraq is our responsibility, beginning with an immediate cleanup of contaminated U.S. military bases. These hazardous sites are scattered across the Iraqi landscape (see map).

The cleanup of U.S. bases will be a start. It will reduce the ongoing toxic exposure of the Iraqi public.

Bio: Dr. Savabieasfahani was awarded the 2015 Rachel Carson Prize for her environmental work. She has also published pioneering studies on war contamination and Iraqi birth defects. She is the author of Pollution and Reproductive Damage.