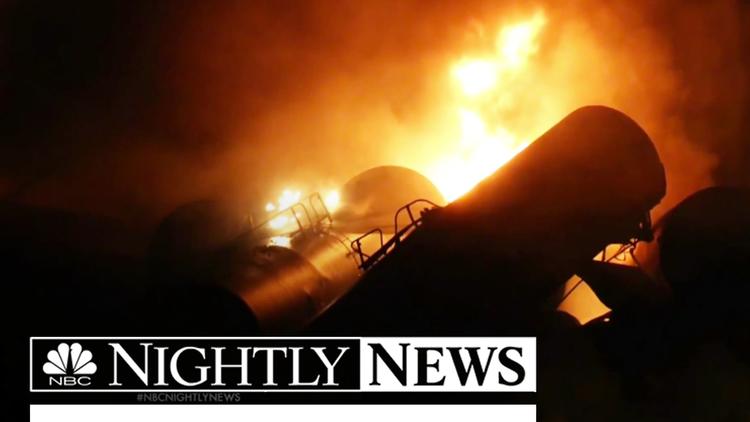 On July 6th, 2013, a train composed of tank cars filled with shale oil sat on the railroad tracks above the town of Lac Megantic, Quebec. The train’s brakes were not secure, the crew was absent, the train began to move, and it rolled into Lac Megantic at a high speed and derailed. Many of the tank cars exploded and burned. Forty-two persons died and five others were presumed dead. The explosions and fire destroyed buildings in an area more than a mile in diameter.

The shale oil in the tank cars originated in the Bakken oil fields of North Dakota; the shale oil was extracted using hydraulic fracturing, or “fracking”.

On six other occasions since the Lac Megantic disaster, Bakken oil trains derailed, with explosions and fires.

Given the number, ferocity of the fires and explosions, it is only by extraordinary good fortune that there have been no deaths and only minor injuries since the disaster of Lac Megantic.

This immediate environmental damage compounds the destruction wrought to the earth by the carbon dioxide produced when shale oil is burned as fuel.

Crude oil continues to be shipped via rail; such rail shipments of Bakken oil may be passing through your home town right now.

A critical missing element in this is the reason why Bakken crude is so explosive. In the process of fracking, numerous agents are added to the fracking fluids, and knowing those agents are may explain why the Bakken oil is so volatile. On the other hand, it may be factors inherent in Bakken crude. The drillers know but won’t tell us.

But 47 deaths and at least 11 accidents – derailments, explosions and fires – are obvious, urgent reasons why Bakken crude shipments must cease until action is taken to make all oil shipments safe beyond question. Reckless shipments must end – citizens’ lives are at stake. Lac Megantic is the evidence.