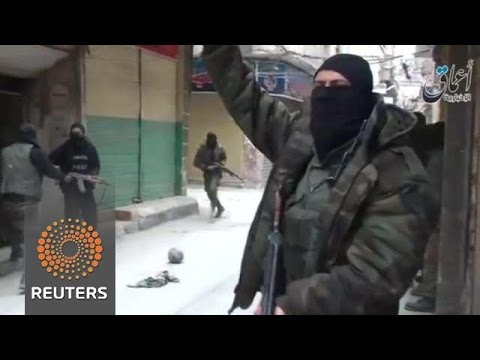 BETHLEHEM (Ma’an) — An official in the support network for the Palestinian refugee camps in Syria said Sunday that a Hamas-affiliated group is fighting the Islamic State in Damascus’ Yarmouk refugee camp.

Ayman Abu Hashem told Ma’an that the Aknaf Bayt al-Maqdes group was fighting IS despite a decision by PLO factions to remain neutral in the Syrian civil war.

Abu Hashem said that the group was once among the biggest armed groups in the camp, before becoming weakened in recent weeks. Only a few dozen remain fighting, he said.

But Farouk al-Rifai, a spokesman for the Palestinian civil society network in Syria, told Ma’an that Aknaf Bayt al-Maqdes fighters were joining some civilians in defending the camp.

He explained that there were 1,500 IS fighters stationed near Yarmouk who were surrounded by the Syrian army before they received reinforcements and 700 IS fighters managed to enter the camp.

Both Abu Hashem and al-Rifai said they had documented three beheadings in the camp, while three others were executed by shooting and 70 Palestinian refugees were apprehended for opposing IS.

The camp has also been targeted by Syrian regime airstrikes, as over 16 barrel bombs were dropped on it on Saturday alone, the officials reported.

Earlier Sunday, a Palestinian official said that around 2,000 people had been evacuated from Yarmouk after IS seized large parts of it.

“Around 400 families, approximately 2,000 people, were able to leave the camp on Friday and Saturday via two secure roads to the Zahira district, which is under army control,” said Anwar Abdul Hadi, a Palestine Liberation Organization official.

Abdul Hadi said Syrian troops had helped in the evacuation, which came as Palestinian forces battled to hold back IS fighters who have captured large swathes of the camp since Wednesday.

He said most of those evacuated from the camp were being hosted in government shelters, with at least 25 wounded taken to two hospitals in Damascus.

The Syrian Observatory for Human Rights, a Britain-based monitoring group, confirmed that “hundreds” of people had been evacuated from the camp.

The group said at least 26 people, including civilians as well as fighters from IS and Palestinian factions, had been killed in the camp since Wednesday.

Yarmouk, in south Damascus, was once home to 160,000 people, Syrians as well as Palestinians.

But its population has dwindled to just 18,000 since the uprising erupted in March 2011.

The camp is encircled by government forces and was under a tight siege for more than a year.

An agreement last year between rebels and the government, backed by Palestinian factions, led to an easing of the siege, but humanitarian access has remained limited.

IS fighters attacked the camp on Wednesday, and were initially largely repelled, but were subsequently able to capture large parts of it.

Palestinian officials have accused Al-Qaeda’s Syrian affiliate Al-Nusra Front of helping IS to enter the camp.