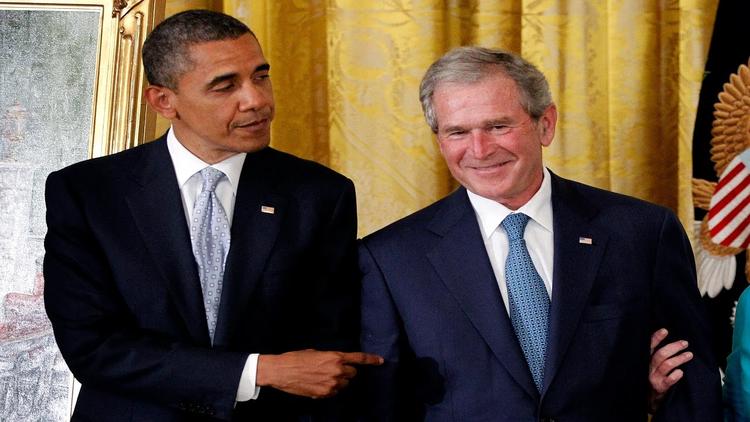 George W. Bush spoke privately this weekend at a Republican Jewish Coalition session hosted by casino sleazeball Sheldon Adelson, who made his pile in a very shady way in China’s Macau and now gets to choose the US president with his ill-gotten gains. What was remarkable was that Bush launched into a criticism of Barack Obama, something he’s tried to avoid since fleeing Washington in disgrace.

Unsurprisingly, Bush wanted Obama to make all the same mistakes that he did. He said Obama hadn’t “followed through” on threats against al-Qaeda and Daesh (ISIL or ISIS), making the US look weak. “In order to be an effective president … when you say something, you have to mean it,” he said. “You gotta kill ’em.” In Bushworld, it is no good warning an adversary about its behavior without actually going to war with that nation. (But then why issue the warning at all?).

Bush did not kill Bin Laden. Obama did. Bush closed down the CIA Bin Laden desk and declared him not a priority, after threatening him. Inconsistent, much?

Bush criticized Obama for withdrawing from Iraq in 2011. But of course it was the Status of Forces Agreement negotiated by Bush with the Iraqi parliament that stipulated a US departure by the end of 2011. Obama didn’t make a new policy here; it was the Bush policy that was implemented. Nor is it reasonable to have expected the Iraqi parliament to want more US Occupation– no such SOFA could then have gotten through parliament. That Iraqis had a key role in deciding all this is routinely ignored by the US press and politicians, including, now, Bush.

Bush also essentially called Obama naive over his negotiations with Iran, saying he worried about the world his grandchildren would live in. Since Bush let al-Qaeda and thence Daesh into Iraq during his military occupation of that country, it is he who must bear responsibility, not Obama. Moreover, during Bush’s non-negoatiation with Iran, that country’s centrifuges went from 6,000 to 19,000. Great dealmaking.