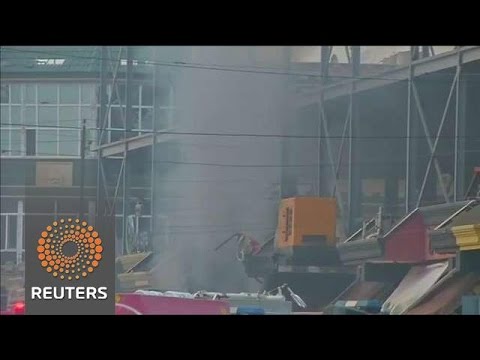 A bombing that killed 3 people and wounded 10 on Saturday outside the US consulate in Irbil, Iraqi Kurdistan, raises an important question about the US diplomatic presence in the eastern reaches of the Middle East. Is it still possible for diplomats to do their work this way?

The US is bombing positions of Daesh (ISIS or ISIL) in Iraq and Syria daily, and it is not surprising that the organization (which claimed the Irbil attack) should attempt to strike back.

Security for US embassies and consulates is largely the responsibility of the host country, which is a scary fact in places where the state has failed. There are a few US military troops guarding these facilities, and the ones in Irbil spotted the approach of the car bomb as it approached and fired on it, detonating it prematurely before it could reach the consulate gates. Thus, there were no American casualties or damage to the consulate. Two of the bystanders killed were Turkish nationals. Security is on the whole good in Irbil, the capital of Iraqi Kurdistan, but Daesh has targeted the city and even mobilized ground troops against it last summer before US air strikes and Peshmerga Kurdish fighters pushed them back.

Last summer, Daesh tried to attack the US embassy itself. The US has an enormous embassy complex in Baghdad, protected behind the blast walls of the Green Zone. But contrary to original plans, it has been vastly scaled back, and only about 1,000 US personnel are there. Diplomats from the State Department are probably a fraction of this staff. Embassy personnel seldom are able to venture out into Baghdad. Much Iraqi government business in Baghdad is still done inside the Green Zone, but being stuck behind the blast walls of the security area interferes with the embassy’s outreach. I visited the embassy in May of 2012 and it was like entering a different world (my hotel was in an ordinary part of the city, not behind those walls, and the ministry of culture kindly ferried us around in minibuses; I had a sense I’d seen much more of the city than had the brave and clearly frustrated embassy staff.)

There are also to be 3,000 US military personnel in Iraq as trainers and advisers to the Iraqi army, which has collapsed. Contrary to what I and others had assumed, these troops are staying on Iraqi military bases and don’t seem to be going out embedded in Iraqi army or Peshmerga units. Still, given that thousands of Iraqi troops just ran away from Mosul last June, letting Daesh have the second largest city in the country, you have to wonder how secure those Iraqi military bases are.

On several occasions in recent years embassy personnel, from Beirut to Tunis, have complained to me when I visited the Middle East that the restrictions they now face on their movements interfere in their doing their jobs as diplomats.

This have been made worse by the politicization of consulate security by Congress and the Benghazi witch hunt. It used to be that politics stopped at the US border. But now the Obama administration has every reason politically to err on the side of caution, and to restrict diplomats or close embassies and consulates so as to avoid all the hearings that would come with another attack on them.

The collapse of armies and of governments in a wide swathe of the Middle East has left the US entirely without embassies in Syria, Yemen or Libya. The staff in Tunis has been reduced to a skeleton crew and families have been sent home. This, at a time when Tunisia is among the few political success stories, so far, in the region and would benefit from more US civilian aid and exchanges. Elsewhere, as in Beirut or Cairo, the embassy is virtually an armed camp, rather than being a window on American for locals or a place from which US diplomats can get to know local society. There is some question whether US diplomacy is even possible in much of the region.