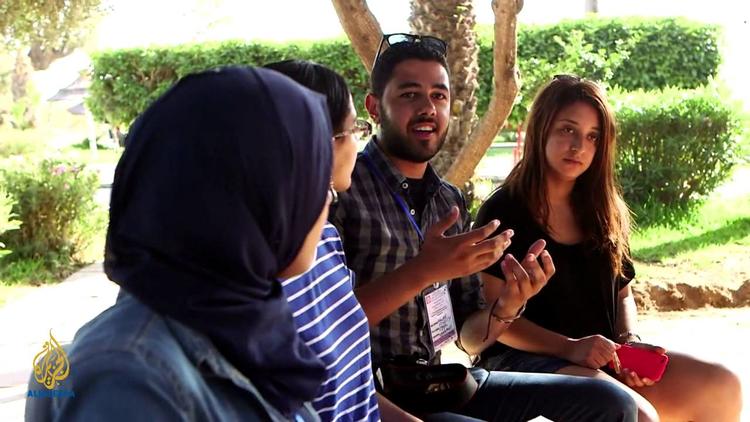 ROME (IPS) – The results of a survey of what 3,500 young people between the ages of 18 and 24 – in all Arab countries except Syria – feel about the current situation in the Middle East and North Africa have just been released.

The report of the survey, which was carried out by international polling firm Penn Schoen Berland (PBS), is not a minority report given that 60 percent of the population of the Arab population is under the age of 25, which means 200 million people. Well, the outcome of the survey is that the large majority of them have no trust in democracy. . .

After the Arab Spring revolutions in 2012, a massive 72 percent of young Arabs believed that the Arab world had improved. The figure dropped to 70 percent in 2013, then 54 percent in 2014, and now it stands at just 38 percent.

According to the survey, 39 percent of young Arabs agreed with the statement “democracy will never work in the region”, 36 percent thought it would work, while the remaining 25 percent expressed many doubts.

It is clear that the Arab Spring has been betrayed by the return of the army to power as in Egypt, or by the clinging of the old guard to power regardless of the costs, like Bashar al-Assad in Syria.

If you add to this the fact that 41 percent of young Arabs are unemployed (out of a total unemployment figure of 25 percent), and of those 31 percent have completed higher education and 17 percent have graduated from university, it is not difficult to understand that frustration and pessimism are running high among Arab youth.

It also contributes to explaining why so many young people feel attracted to the Islamic State (ISIS) which wants to topple all Arab governments, defined as corrupt and allied to the decadent West, and create a Caliphate as in Muhammad’s times, where wealth will be distributed among all, the dignity of Islam will be enhanced, and a world of purity and vision will substitute the materialistic one of today.

This is why ISIS is attracting youth from all over. Besides, according to experts, for the terrorist to have a geographical space and run it as a state, where hospitals and schools function and there is a daily life to prove that the dream is possible, represents a great difference with previous terrorist movements like Al-Qaeda, which could only destroy, not really build.

But the survey also reveals something extremely important. To the question “which is the biggest obstacle for the Arab world?”, 37 percent indicated the expansion of ISIS and 32 percent the threat of terrorism. The problem of unemployment was mentioned by 29 percent and that of the Israeli-Palestinian conflict by 23 percent . . .

In this column, Roberto Savio, founder and president emeritus of the Inter Press Service (IPS) news agency and publisher of Other News, writes that from a high point in the aftermath of the Arab Spring revolutions, Arab youth have largely lost their trust in democracy, betrayed by the return of the army to power or the clinging of the old guard to power regardless of the costs.