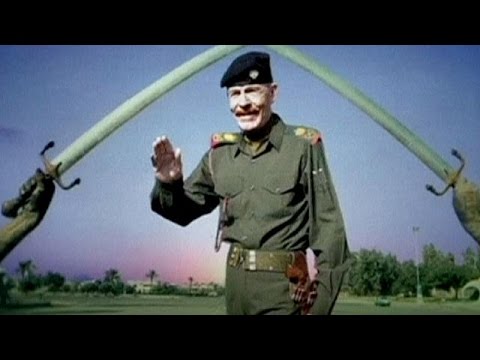 The currently partly unemployed Iraqi governor of Salahuddin Province, displaced from much of his territory by Daesh (ISIS or ISIL), maintains that former Baath vice president of Iraq under Saddan Hussain, Ezzat al-Douri, has been killed by Shiite militias in a firefight north of Tikrit in the Hamrin mountains. The body has been delivered to the US embassy in Baghdad for a DNA test. Al-Douri was one of those wanted officials featured in George W. Bush’s stack of playing cards. The Baath Party of Iraq has denied the reports of his death.

Al-Douri is significant because he was one of the first high Baath officials to turn to a religious group as a power base. This strategy became common after the 2003 US invasion, but al-Douri did it in the late 1990s. The Baath Party had been founded by Christians and was militantly secular, often persecuting religious groups and parties.

Al-Douri, however, became a patron of the Naqshbandi Sufi order in Mosul, northern Iraq. Sunnis in Iraq at that time were still largely traditionalists, and Sufism was part of their tradition. Sufis emphasize mystical experience and are often dismissive of dry legalism (Christians might hear echoes of St. Paul and thinkers like Meister Eckhart). They meet on Thursday (and other) evenings for group chanting, and see God as a divine beloved. Their sensibilities are very different from the Wahhabi-influenced Salafi brand of Sunni Islam, which highlight strict adherence to its conception of Muslim religious law

The “Men of the Naqshbandi” emerged as one of the more effective guerrilla fighters against US and Iraqi Shiite troops in northern Iraq. Al-Douri was said to be behind them, a shadowy figure directing their insurgency. Still, there were some fifty major insurgency cells in northern and western Iraq during the past 12 years, and the Naqshbandis were only one. Some were secular, as most Sunni Arabs in Iraq had a secular mindset. Note that the Naqshbandi order in Turkey, Central Asia and Pakistan and India is not typically militant and that this Iraqi branch only turned to guerrilla activity because of American colonialism.

last spring, the Naqshbandis in Mosul were one of the groups that decided to ally with Daesh or ISIL to throw out the Shiite army. Daesh took advantage of the alliance to arrest leading Naqshbandi figures and ex-Baathist ones, stabbing their new allies in the back. (Daesh is an offshoot of Salafism and hates Sufis under ordinary circumstance).

The US military has a cult of ‘decapitating’ insurgent organizations. But this strategy manifestly has not worked against the Taliban or in Iraq. In part, some of these organizations are led by clans as republics of cousins, and when one leader is killed, his cousin just steps in. In part, they are based on religious ties. Jenna Jordan found that in only 5 percent of her 300 cases of insurgency was a decapitation strategy successful against a religious group. Religious charisma seems to be easily transferable.

So, it probably just doesn’t matter that much if al-Douri was killed (his death has been reported many times in the past). He was old in his 70s, and likely not very vigorous any more. And his earlier successes as an insurgent have turned bitter since his foolish decision to ally with Daesh went bad and the latter displaced him.

One conclusion we can draw is that by destroying the Baath government of Iraq, the Bush administration created a vacuum of power and culture that religious forms of resistance filled. Iraqi Sunnis were among the more secular people in the Middle East. It is desperation that drove them to religious revolt. One man’s death won’t make any difference in that process.