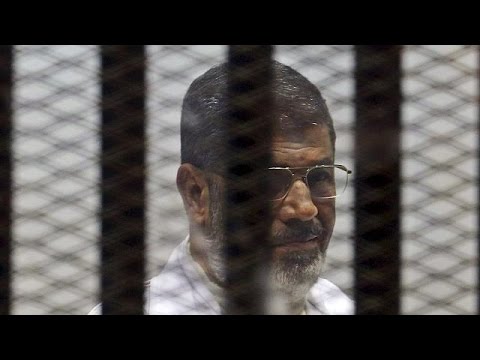 Ousted Egyptian president Mohamed Morsi, along with 14 other defendants, was sentenced on Tuesday to 20 years in maximum security prison and five years of parole over the killing of demonstrators outside his palace in 2012.

Morsi, the country’s first democratically elected president, was convicted of ordering the arrest and torture of protesters during the clashes that erupted in December 2012, following his decree that all of his decisions and the laws he issued were immune from challenge and could not be overturned.

The charges stem from the Ettehadiya Presidential Palace violence, in which ten people were killed and many others injured, including supporters and opponents of the president and former leader of the Muslim Brotherhood.

The Cairo Criminal Court acquitted the former president—who was ousted in a 2013 military coup—of murder charges that could have seen him face the death penalty.

Hearing the verdict, Morsi and the other defendants gave a four-fingered salute, a symbol of the deadly clearance of Brotherhood supporters at the Rabaah al-Adawiya mosque in 2013.

A senior Brotherhood figure, Amr Darrag, called the ruling a “travesty of justice”.

“They want to pass a life sentence for democracy in Egypt,” he said.

International human rights groups denounced the legitimacy of the trial and the politicization of Egypt’s judiciary.

Calling the trial a “sham,” Amnesty International declared: “The sentencing of Mohamed Morsi to 20 years in prison today is a travesty of justice and demonstrates, once again, that the Egyptian criminal justice system appears to be completely incapable of delivering fair trials for members or supporters of the former president’s administration and the Muslim Brotherhood.”

And Mohammed Soudan, a senior member of the Muslim Brotherhood and an official within its affiliated Freedom and Justice Party, told Al Jazeera that the trial was a “political farce.”

“The verdict is 100 percent a political verdict. Morsi, his advisers and supporters who are accused in this case were victims … police and army officers watched as the opposition attacked the presidential palace,” Soudan said. “They killed 11 people and nine of them were supporters of Morsi … the verdict is a test for the protesters in the street, and also a test for the international community.”

But some argued for some small measure of accountability for the violence, however imperfect.

Hoda Nasrallah, a lawyer at the Egyptian Initiative for Personal Rights whose client, political activist Ola Shahba, was physically and sexually assaulted near the presidential palace, told the publication Mada Masr that her group opposed the death sentence “in principle.”

Still, Nasrallah clarified, “It is clear that there is a deluge of death sentences, along with the imposition of exaggerated penalties upon defendants affiliated with the Muslim Brotherhood. However, the fact remains that the Muslim Brotherhood—-during the course of the year in which they assumed power—committed crimes which necessitate legal prosecution.”