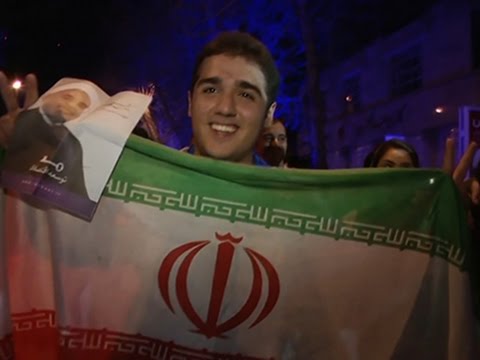 Iranian supporters of the framework nuclear deal announced on April 2 describe it as a historic achievement that will offer a better future for the people of Iran and improved ties with the world.

Hard-liners, however, say the deal is a disaster that achieves “nothing” for the country.

The tentative agreement clears the way for a comprehensive and lasting deal that will curb Iran’s nuclear program in exchange for sanctions relief.

Speaking on state television on April 3, Iranian President Hassan Rohani praised the agreement, calling it “historic” for the Iranian people. “Some think that we must either fight the world or surrender to world powers. We say it is neither of those, there is a third way,” he said. “We can have cooperation with the world.”

Rohani also said that Iran will keep its “nuclear rights” while at the same time securing an immediate removal of the crippling sanctions.

He said the framework deal was a win-win achievement and a step on the path to constructive interaction with the world and countries that respect the Iranian nation.

Rohani’s hard-line critics, on the other hand, say the tentative agreement was a cheap bargain for the West.

Hossein Shariatmadari, an adviser to Iranian Supreme Leader Ayatollah Ali Khamenei and editor of the ultra-hard-line Kayhan daily, said Iran lost its “ready-to-race horse” in the deal and was left with a “broken bridle.”

Lawmaker Hamid Rasayi said some of the red lines stated by Khamenei had been violated in the Lausanne statement because of the “rush” to sign a deal. “We don’t want to refer to the fact sheet issued by the U.S. But when we see similarities between their text and the text issued by our Foreign Ministry, we understand the reason why the U.S. is happy,” he said.

Another lawmaker, Esmaeil Kowsari, said the Iranian negotiators had acted very “weak” and that the results of their work were unacceptable.

Conservative analyst Mahdi Mohammad dubbed the deal a “disaster” in Fordow, a reference to Iran’s Fordow nuclear facility, which would halt enrichment and be turned into a research center under the parameters of the agreement.

Khamenei, who as supreme leader has final say in the Islamic republic, has yet to comment on the framework deal. He has supported the talks and repeatedly praised the Iranian negotiators.

Friday Prayer leaders, who are said to receive their main talking points from Khamenei’s office, hailed the deal and spoke glowingly of the negotiators, saying that Iran’s rights were preserved.

“All these gentlemen, especially the esteemed president and foreign minister, should be congratulated,” Tehran’s temporary Friday Prayer leader, Ayatollah Kashani, said in his sermon.

Kashani’s speech, however, came with a warning. “The West should obey a certain limits in future negotiations,” he said. “It should not discuss issues such as freedom, human rights, and the justice system.”

News of the framework deal has not eased the Iranians’ concerns about their nuclear rights, he said, adding that these concerns have in fact escalated.

However, another speaker during the sermons, presidential chief of staff Mohammad Nahavandian, defended the nuclear deal, calling it a victory for Iranians.

Nahavandian said Iran now received “respect” instead of “sanctions and threats,” and had convinced the West its nuclear program is peaceful. He said Iran had told world powers to work together to address their concerns.

Iranian Foreign Minister Mohammad Javad Zarif, who signed the potentially historic deal in Lausanne after more than a week of negotiations, received a hero’s welcome upon his return to Tehran on April 3.

Some also voiced sarcastic chants targeting hard-liners, likening them to Israel, which opposed the negotiations and harshly criticized the tentative agreement. “Kayhan, Israel, condolences, condolences,” people chanted, according to amateur videos posted on the Internet.

Zarif told the cheering crowd at Tehran’s Mehrabad airport that none of Iran’s nuclear activities will stop. He also expressed gratitude to Khamenei for his support and said the joint statement issued in Lausanne will be a “basis for drafting the final agreement.”

Many Iranians celebrated the tentative agreement late in the night of April 2 in the streets of Tehran and in their homes, while expressing optimism that it will lead to a better economy and better ties with Western countries, mainly the United States.