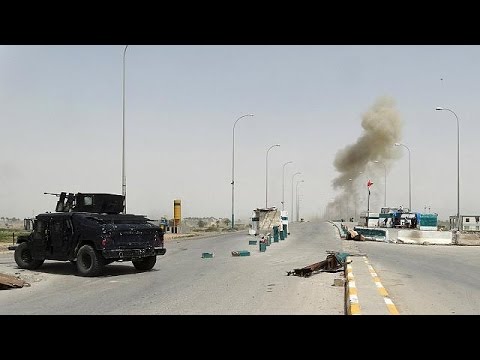 Al-Khaleej (The Gulf) reports that Daesh (ISIS, ISIL) has taken new territory in the western Al-Anbar Province of Iraq and may be on the verge of taking the provincial capital, Ramadi, a week after they were decisively defeated in Tikrit in the south of Salahuddin Province. They were also pushed back from the refinery city of Beiji near Tikrit, though Iraqi authorities revealed that Daesh had slaughtered 300 members of tribes there in the past few days. Daesh killed embers of the Albu Mahall, al-Karabilah, al-Salman, Albu `Ubayd, and al-Rawiyyin tribes. Government forces received close air support from the US Air Force. But despite the success of Iraqi troops and their Shiite militia auxiliaries in Salahuddin north of Baghdad, government forces are facing setbacks to the west of the capital.

Daesh has taken al-Sufiya entirely, chasing the Iraqi army from the district. It continued to hold most of Albu Ghanim and has surrounded hundreds of families there. It has long had a toehold in western neighborhoods of Ramadi, the provincial capital of al-Anbar, and seems to be making a successful push toward the center of the town.

A member of parliament from the province, Adil Khamis al-Mahallawi, called Daesh the “Kharijites of this age,” referring to an early Islamic heretical group, more extreme members of which insisted on undeviating adherence to their understanding of Islam and excommunicated and killed those who differed with them.

He said Daesh had also killed dozens of non-combatants in the district of Albu Ghanim northeast of Ramadi.

The deputy speaker of the al-Anbar provincial legislature, Falih al-Isawi, said, “The situation in the city of Ramadi is turbulent and completely bad. The entire province of al-Anbar is a inch away from being dominated by Daesh.” He also warned that Ramadi is headed for collapse.

Another member of al-Anbar’s provincial legislature, Arkan Khalaf al-Tarmuz, said that Daesh had succeeded in dominating the district of Albu Ghanim east of Ramadi, and had surrounded hundreds of families in the district. He explained that it had happened because the Sunni tribal levies of the area lack weaponry and had seen their stockpiles dwindle. They only have one security station. Likewise, the Popular Mobilization Forces, i.e. Shiite militias, had withdrawn from the area (perhaps to go fight in Tikrit and Beiji?) Al-Anbar is mostly Sunni Arab.

An official in Iraq’s security agency said that there was fierce fighting between Daesh and Iraq security forces, who are supported by tribal levies, in eastern Ramadi