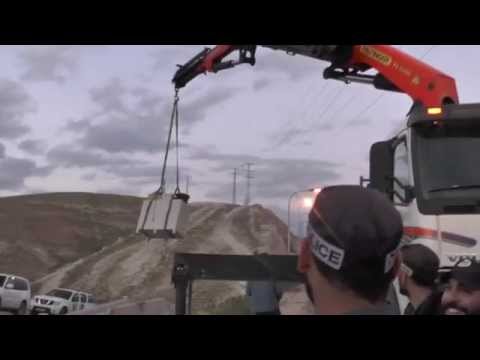 Solar panels finally brought electricity to the Bedouin village of Khan al-Ahmar in the West Bank, but the residents’ joy was short lived.

A few weeks after the panels were installed, Israeli authorities confiscated them, indicating the latest chapter in Israel’s long battle to quash the strategically located village.

PNN reports that, on Wednesday, policemen and Israeli soldiers escorted employees of the Israeli Civil Administration (the governing body of the Israeli occupation of the West Bank) on a trip to Khan al-Ahmar, a Bedouin village located a few kilometers from occupied East Jerusalem. There, they dismantled 11 solar panels, most of which had just been donated and installed by the Palestinian NGO Future for Palestine to give this village a few hours of electricity a day.

Israel has a long history of opposing any construction or development projects in Khan al-Ahmar, which is the last Palestinian outpost in the E1 zone in the West Bank. Though the total area of the zone is only about 12 km², it has both strategic and symbolic importance for Israel because it connects the northern and southern West Bank.

According to numerous analysts, local NGOs and UNRWA, the UN agency for Palestinian refugees, Israel is looking to expel the last Palestinian residents of Khan al-Ahmar in order to connect the Israeli settlement Ma’ale Adumim to Jerusalem.

Moreover, cutting the last direct link between the north and south parts of the West Bank would further break up the Palestinian Territories, which are already dotted with Israeli settlements, and would create one more barrier to the development of a Palestinian state in the future.

The Bedouin are a semi-nomadic Arab people who have lived for several centuries in the Negev desert. Today, the Bedouins are Israeli citizens. There are 150,000 of them, making up 12 per cent of Israel’s Arab population with most earning their living through agriculture and livestock.

Today, the tension in Khan al-Ahmar is palpable, especially since Israel began construction of 3,000 houses in the E1 zone in December 2012. This active settlement expansion was launched just after the UN gave observer state status to Palestine in November 2012. Israel has also prevented any new construction from taking place in the Palestinian village, so the removal of the solar panels fell into a well-worn pattern.

“Israel decided it was illegal to build in Khan al-Ahmar, but they didn’t consult with any Palestinians” said Arik Ascherman, the president of Rabbis for Human Rights, an NGO made up of rabbis who oppose, notably, the demolition of homes and displacement of villages.

The following is his testimony: “My NGO has worked with the residents of Khan al-Ahmar since the late 90s to try to make a case for their rights in the midst of Israel’s push to colonize the region. The villagers contacted us when the trucks arrived to remove the panels and I went there immediately. All in all, eleven panels were taken down, including one which had been there for several years and which helped bring a little bit of energy to this deprived village. The residents didn’t resist.

“I asked the police and the officials several times why they were removing these panels. They all had the same response, simply saying: ‘It’s illegal to build here.’ But who wrote that law? I tried to explain to them that Israelis had determined what constituted as illegal and that no Palestinian had been consulted in this decision.

“I then asked them how they would react if someone had just told them they couldn’t live in their homes because of a decision that they had no say in. But, of course, I didn’t get a response. I also tried to call the district attorney, but, unsurprisingly, he wasn’t available.

“The conflict over Khan al-Ahmar has been going on for years. I think that the only factors preventing Israel from simply displacing the residents are media interest and the high level of international pressure on this subject. Still, I don’t know how much longer we can hold out. I do have hope that the Bedouin’s lawyer will manage to show that there is no legal justification for the removal of the panels because, according to him, the installation of these solar panels does not constitute an actual ‘construction’ under Israeli law. That would be one little victory for us”.