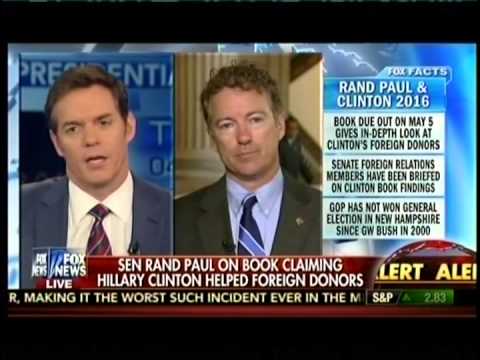 The philosophical difference between the Libertarian-leaning Sen. Rand Paul (R-KY) and the GOP hawks has burst into open name-calling. First, Sen. Lindsey Graham (R-SC) said that Paul had been more wrong than right, and Sen. John McCain (R-AZ) jumped in, calling him “naive.”

On Fox News’s “America’s Newsroom” on Tuesday, Paul hit back, calling Graham and McCain “Obama’s lapdogs,” who wanted to follow his policies abroad but intensify them:

Paul connected Graham and McCain to the Libya intervention backed by then Secretary of State Hillary Clinton, which he called a mistake, and said it had led to the rise of Muslim radicalism in that country. He admitted that he thinks the US needs to intervene against ISIL in Iraq, but said he regretted that ISIL had so many American weapons, which fell into their hands after Graham and McCain voted to invade Iraq, create a new army, and arm it with American weapons.

Paul said he was against bombing the facilities in Syria of President Bashar al-Assad, because that would make ISIL stronger. He also opposes arming Syrian rebels because, apparently, he does not trust them to remain American allies; they could defect to al-Qaeda or Daesh (ISIL or ISIS). (It is true that many former moderate Free Syria Army forces have now joined one or the other extremist group).

It has come out that Hillary Clinton was in favor of arming the Syrian rebels early in the Syrian turmoil, but was blocked by President Obama. McCain supported the same policy, though urged it be even more muscular, and wants a full-blown US intervention in Syria to overthrow the al-Assad regime.

McCain and Graham fired back on Wednesday. McCain called Paul “the worst possible candidate” on foreign policy. Graham said Paul’s approach was “one step behind leading from behind.”

What are the rights and wrongs here?

It is true that McCain and Graham haven’t seen a war they wanted to stay out of. They watered at the mouth at the prospect of invading and occupying Iraq and Afghanistan, and only regret we couldn’t just permanently colonize them. They supported the Libya intervention but wanted Obama to do more than provide a no-fly zone, going all the way to directly overthrowing dictator Muammar Qaddafi.

In contrast, Obama opposed the Iraq War and was unenthusiastic about the Libya intervention (one leak said he called it a “turd sandwich.”). He basically gave in to Samantha Powers, Susan Rice and Hillary Clinton because the National Security Council predicted tens of thousands dead in Benghazi if Gaddafi’s murderous sons were allowed to crush it with their tanks.

So Paul’s characterization of McCain and Graham as “Obama’s lapdogs” is inaccurate. It is true that where Obama has intervened, as with bombing raids on ISIL, those two senators approved and wanted him to do more. But they supported many wars and interventions that Obama opposed or felt lukewarm about.

Paul is also being a little disingenuous, insofar as he approves of the bombing of Daesh in Iraq and Syria, so he is not a consistent anti-interventionist. It is a little difficult to see the difference between bombing Iraq to stop Daesh from taking it over and bombing Libya to stop Gaddafi from winning out.

The really big difference to which he points is that he wants to stay out of Syria even more fervently than Obama does. Whatever Obama says, he hasn’t actually created a credible pro-Western rebel force that could take on the Baath regime in Damascus. He has avoided bombing Baath facilities. His main targets have been Daesh and al-Qaeda. So Paul’s proposed Syria policy looks a lot like Obama’s actual Syria policy. It is true that it is non-interventionist and contrasts with the interventionism of H. Clinton and John McCain.

One take-away is that Rand Paul seems a little bit of a defensive realist insofar as he can live with an al-Assad-ruled Syria, even though al-Assad is by now a war criminal.

Here is a transcript from the appearance at Fox News’ America’s Newsroom :

“HEMMER:… Let’s talk about your campaign because people want to know if you get the nomination how you would govern. Lindsey Graham said this about your world view, “Generally speaking, you have done more wrong than right.” John McCain says, “You don’t understand. You displayed this kind of naivete since you came to the Senate.”

What’s going on there?

So if there’s anyone who is the most opposed to President Obama’s foreign policy, it’s me. And these people who call loudest to criticize me are great proponents of President Obama’s foreign policy. They just want to do it 10 times over. But I’m the only one actually standing up and saying: the war in Libya was a mistake; the bombing of Assad would make ISIS stronger; the arms to the Islamic rebels would make ISIS stronger.

So I’m really the one standing up to President Obama. And these people are essentially the lap dogs for President Obama and I think they’re sensitive about that.

HEMMER: Well, how would you define yourself? I mean, you’re an inventionist or an isolationist? You will be asked that question repeatedly. And you will say what?

PAUL: Yeah, I’m a Reagan Republican. I believe in a strong national defense. I believe in peace through strength. I think that intervention is not always the answer and that some interventions lead to unintended consequences.

So for example, Hillary’s war in Libya has made Libya less table, more chaotic and has allowed the rise of radical Islam. So we are more at risk after that war. It was a mistake for that war to occur and for the U.S. to be involved with toppling Gadhafi.

Realize that these people who criticize me were for giving arms to Gadhafi last year or the year before, they were for toppling Gadhafi. So they’re on both sides of so many wars. Some of these critics are for bombing both sides of the Syrian war. Their foreign policy is so disjointed, confusing and chaotic that really people need to re-examine those who want to be involved in every war. I say we get involved when there’s American interest. I think we do have to militarily stop ISIS. But I am sad that ISIS got a lot of the weapons from interventionists in my party and the President who gave them the weapons indirectly.

HEMMER: The word I got from New Hampshire over the weekend is that you guys are playing nice. Perhaps not?

PAUL: I’ll play nice, if they’ll place nice. But if they’re going to trot around the country, criticizing me, I’m going to make sure that the American public knows that these are precisely the people that support President Obama’s foreign aid, Libyan war and the Syrian war. And they need to explain themselves.

HEMMER: I know you had a big weekend in New Hampshire and you’re back in Iowa later this week. Senator, we will speak again. Thank you for your time today.

HEMMER: You bet. Rand Paul, the Republican from Kentucky.”