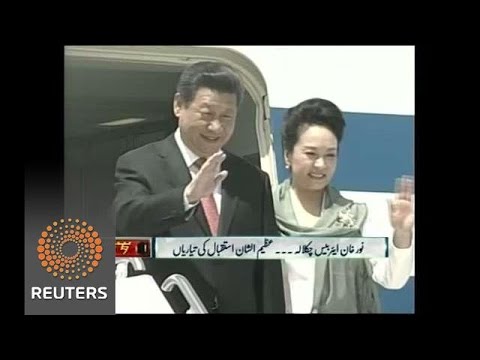 Chinese President Xi Jinping made a state visit, full of pomp and circumstance, to Pakistan on Monday, but its centerpiece was a $46 billion investment in the country, dwarfing the US Congress’s $7.5 bn. program initiated in 2008. Whereas the US likes to sell useless weapons systems that either rust in warehouses or foment wars like that in Yemen, China’s investment is divided between $11 bn. in infrastructure and $35 bn. in energy.

President Xi underscored that Pakistan had been his country’s friend back in the 1960s when China was isolated on the world stage, and called Pakistan China’s “Iron Brother.” (In the 1960s India and China had had a brief border dispute, and Pakistan and India have had a long term set of struggles over Kashmir, so Pakistan and China allied, in part against India).

But the China-Pakistan Economic Corridor (CPEC) is less about India and more about regional development for China and stabilization for Pakistan. The northwestern Xinjiang Province (pop. 22 mn.) has faced marginalization and a small separatist movement by the Uygur Muslim minority, which China sees as stirred up by the US CIA. Some Uygurs went to Afghanistan to join the Taliban. Beijing has dealt with that separatism in part by settling Han Chinese there in large numbers and in part by crackdowns. But the Communist Party now seems to hope that new forms of economic advance with bring prosperity and tranquillity. Xi said, “Our cooperation in the security and economic fields reinforce each other, and they must be advanced simultaneously.”

China’s enormous northwest is much closer to the Arabian Sea than to the port of Shanghai. It is about 2800 km. from Urumqi (pop. 4 million, the size of Los Angeles inside city limits) to Karachi, but twice as far to Shanghai. China has decided to develop its northwest by turning Pakistan into a sort of Hong Kong West. Hong Kong played, and perhaps still plays an important role as a gateway for certain kinds of foreign investment into China. In the same way, Pakistan can be a window on the world and a conduit for oil and trade into northwestern cities such as Urumqi and the smaller Kashgar (pop. 1 mn.)

New rail lines will be built to Karachi and to the new port of Gwadar on the Arabian Sea near Iran. Some will go through Baluchistan, tying that restive province, which has seen a separatist movement, more tightly to Islamabad. For its part, China will be at the mouth of the Persian Gulf, and appears to hope for pipelines bringing oil across Pakistan and the Himalayas up to Xinjiang. (In my own view, by the time all those pipelines and deals are done, China will have largely transitioned to electric cars fueled by renewables).

Since last June, Pakistan’s army has somewhat inexplicably turned on its former allies among the Pakistani Taliban with a big aerial bombing campaign (“Zarb-e Azb”) aimed at disrupting the Haqqani and other terrorist networks that had been targeting US troops and the Afghanistan National Army across the border. Haqqani leaders are said to have scattered. China appears to have made a defeat of the Pakistani Taliban insurgency a prerequisite for the CPEC, perhaps because of their links to Uygur fundamentalists. And, obviously, Pakistan can’t be Hong Kong West if it is routinely blown up by Taliban.

China will also build a solar electricity plant (yay!) and a coal plant (boo!) for Pakistan, which suffers from a massive shortfall in electricity. That shortfall is a big brake on economic development, since factories can’t run efficiently if the electricity keeps going out (Pakistanis call these brown-outs “load shedding.”

Because the Chinese plan involves a great deal of transit trade for Pakistan, and because China is wisely attending to energy and infrastructure, the CPEC could have a tremendous impact on the Pakistani economy, which has been lethargic in comparison to India’s in recent years.

That China views its role in Pakistan as that of an agent of vast economic progress likely makes it a more attractive partner for Islamabad than the US. A majority of Washington’s aid (and often a vast majority) has been arms and “security-related” according to the Center for Global Development:

“Between FY2002 and FY2009, only 30 percent of US foreign assistance to Pakistan was appropriated for economic-related needs; the remaining 70 percent was allocated to security-related assistance. In the period since the KLB authorization (FY2010 through the FY2014 budget request), 41 percent of assistance has been allocated for economic-related assistance.” But 100% of the CPEC is development aid and loans, which in turn are aimed at increasing trade and manufacturing. If the $31 bn. the US has spent there since 9/11 had been structured more like the Chinese plan, the US might have won in Pakistan. As it is, it is relinquishing that sphere of influence to China.