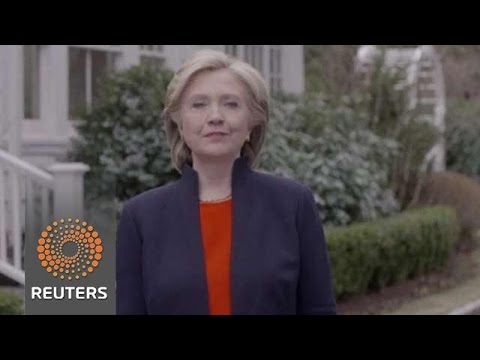 Hillary Clinton announced her bid for the presidency Sunday, prompting another of these attempts at IC to do a quick overview of what we can expect from the candidates with regard to Middle East policy.

Clinton supported Israel’s attack on defenseless Gaza last summer, which left about 2000 Palestinians dead and wiped entire civilian neighborhoods off the map. She blamed Hamas entirely for the conflict.

On the other hand, Sec. Clinton does see the Palestinians as occupied, writing in “Hard Choices”: ““When we left the city and visited Jericho, in the West Bank, I got my first glimpse of life under occupation for Palestinians, who were denied the dignity and self-determination that Americans take for granted.”

In the bizarro world of inside-the-Beltway American politics, this rather mild protest of a major human rights violation was treated as controversial.

As Secretary of State, Sec. Clinton was eager to give substantial and immediate aid to the Syrian rebels in the civil war there, but Obama blocked this plan, not wanting another Middle East intervention.

She opposes, however, the deployment of US combat troops to Iraq to fight ISIL or Daesh. She is OK with providing close air support to e.g. the Iraqi army, but doesn’t want to send in the US infantry.

She supports President Obama’s negotiations with Iran and is critical of the 47 GOP senators who wrote a letter to Ayatollah Khamenei warning him they intended to scuttle the talks. On the other hand, she threatened in 2008 to launch a retaliatory nuclear attack on Iran if its leaders tried to nuke Israel.

Although she initially opposed the youth revolutions in the Arab world of 2011, she quickly came around and was firmly in their support by spring of 2012. By that time, however, the youth in Egypt were mostly angry at her long friendship for the deposed president Hosni Mubarak and refused to meet with her.

She initially deeply criticized Edward Snowden for his revelations of National Security Agency domestic spying and its violation of the fourth Amendment. More recently, she has been more critical of the NSA. She supports net neutrality for the internet.

In short, it seems to me that Sec. Clinton’s Middle East foreign policy would be very similar to that of President Obama, but more interventionist. She differs with Israel, as all presidents have since 1967, over its occupation of the West Bank. But she is closer to the government of Israeli PM Binyamin Netanyahu than is Obama, as seen in this CNNN transcript. She would have given more money and weapons early on to the Free Syrian Army. She would argue this step would have forestalled the take-over by Daesh/ ISIL. But it is also possible that the weapons and trained fighters would just have been scooped up by Daesh/ ISIL. She was one of those who argued for going into Libya. (NB: I also favored the UN no-fly zone over Libya). Of course, she also voted for Bush’s disastrous and illegal Iraq invasion and occupation, which, it seems to me, still says something about her political style.

Sec. Clinton brings substantial foreign policy expertise to these thorny issues. But she is more hawkish than Obama and seems likely to get the US heavily involved in the region again. It is not clear that she would actually do anything about continued illegal Israeli squatting on Occupied Palestinian land.