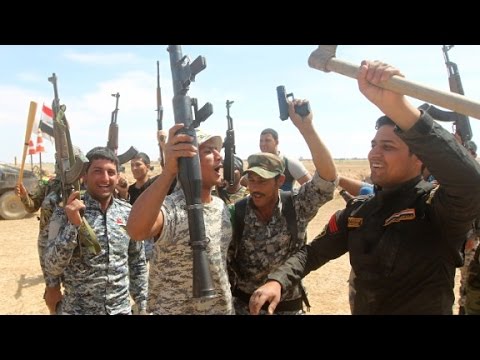 By now the Iraqi government has a long history of claiming areas are “liberated” when the local picture remained mixed. This is the sort of thing that occurred recently in
where Tikrit, where PM Haydar al-Abadi went on television and declared Tikrit no longer in the hands of Daesh (ISIL or ISIS).

In fact, whole neighborhoods appear still to be Daesh territory and some 400 fighters from that group remained in the city Friday evening. In any case, the difficulty the government had in taking Tikrit had to do not so much with the number of fighters but with the booby traps Daesh had set everywhere.

Still, the Iraq press thinks it is only a matter of time before Tikrit does fall entirely.

A notable development in Tuesday’s advances, which saw the Tikrit-Samarra highway reopened, was that the Shiite militias–the Badr Corps, the League of the Righteous, and an organization termed “Iraqi Hizbullah” fought Daesh with US Air Force close air support. Some of the militia had announced that they would not fight alongside the USA. But all seem gradually have moved into the city with the help of US precision targeting of enemy positions.

This battle is a milestone in the sense that Iraq’s Shiite militias are also being supported on the ground by Iranian Revolutionary Guards Corps advisers. Thus, de facto the US Air Force is giving close air support to Iranian forces

The Tikrit campaign is thus unprecedented in modern times in combining US, Iranian and Iraqi forces. You’d have to go back to the Baghdad Pact of 1955 to find such an alliance, and it was short-lived, ended by the 1958 Iraqi nationalist revolution of Abdel Karim Qasim.

Although French fighter jets have also flown against Daesh in Tikrit, apparently Saudi Arabia and other GCC countries have not joined in. For them, the spectacle of Shiites taking Sunni Tikrit is too painful, and it is not clear that they think Daesh is greater threat than Iran. Obama certainly does think that. Thus we see the great divergence between US and Saudi policy in Iraq and to some extent Syria.

CNN: “Iraqi official: Tikrit has been liberated from ISIS