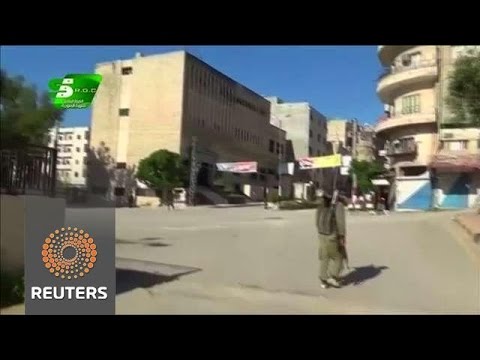 A coalition of extremist groups with al-Qaeda ties managed on Saturday to take the city of Jisr al-Shughur from the Syrian army. Among them were fighters of the Support Front (Jabhat al-Nusra) and the Islamic Movement of the Free Men of the Levant (Ahrar al-Sham). Also involved was Chechen terrorist Muslim al-Shishani and his Syrian Army.

Al-Hadath [The Event], a Saudi-owned, Dubai-based sister news organization of Alarabiya, argues in the link above that the al-Qaeda-linked leaders and organizations who fought together to take the city were organized and funded by Turkey for this purpose.

The significance of these developments is that the coalition led by al-Qaeda has recently taken both the city of Idlib and Jisr al-Shughur in Idlib province, positioning it to move against the key regime-held port of Latakia. Latakia is one of the ways Russia resupplies Damascus and its loss would be a tremendous blow to the regime of Bashar al-Assad. Moreover, the port is nestled in a hinterland dominated by the Alawite Shiites, who are the backbone of the regime and constitute some 10-14% of the Syrian population. The upper echelons of al-Assad’s Baath Party are staffed by Alawites. If the regime cannot protect its own, it will soon fall.

Al-Qaeda views Alawites as wretched heretics and has genocide on its mind if it wins in Syria.

The US military has bombed Support Front positions, given its status as an al-Qaeda affiliate, along with Daesh (ISIS or ISIL) ones. (Daesh was excluded from the Jisr al-Shughur operation). Despite the clear al-Qaeda links of Free Men of the Levant, the US has not designated it a terrorist organization, and there are rumors that Turkey supports it.

The rebels launched a Latakia campaign in 2013, which failed, but the regime is more exhausted and weaker now than then.