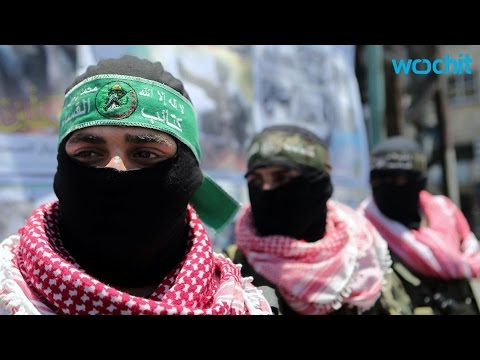 “In the chaos of the conflict, the de facto Hamas administration granted its security forces free rein to carry out horrific abuses including against people in its custody. These spine-chilling actions, some of which amount to war crimes, were designed to exact revenge and spread fear across the Gaza Strip,” Philip Luther, Director of the Middle East and North Africa Program at Amnesty International, said.

Six of the men – who had bags over their heads — were executed in front of the Al-Omari mosque by men in Hamas military uniforms after Friday prayers in front of hundreds of onlookers. The men were knelt against a wall and shot in the head before being sprayed with gunfire.

Eleven other men were said to have been killed in the Katiba prison after being sentenced to death by local courts, with two bodies dumped near the al-Azhar University in Gaza City.

In all the killings, Hamas said that the suspects had been sentenced for collaborating with Israel during the ongoing conflict following trials preceded over by security and legal experts in “revolutionary courts.”

Information passed to Israel’s security services by Palestinian collaborators — in the occupied West Bank, East Jerusalem, and Gaza — is used to make arrests and, in Gaza specifically, to assassinate high-profile political and militant figures.

Israel, as an occupying power, has been criticized by rights groups for endangering the lives of Palestinians who provide information to security services, which usually occurs under the threat of blackmail or through desperation.

Under Palestinian law, collaboration with Israel is punishable by death. All death sentences, however, require President Mahmoud Abbas’ approval before being carried out, and Abbas issued a moratorium on death sentences in 2005.

According to Amnesty, at least 16 of those executed on August 22 had been in Hamas custody before the 51-day war began and were awaiting the outcome of their trials when they were removed from prison and executed.

“Since 2008, Amnesty has documented Hamas taking advantage of conflict situations. Now we can clearly see those patterns, this is not new,” Saleh Hijazi, a researcher with Amnesty International’s Middle East and North Africa program who worked on the report, told Ma’an.

The 23 Palestinians killed by Hamas were targeted under an operation code-named “Strangling Necks,” the largest number of alleged collaborators killed over a six year period.

During the same time Israel has launched three military operations on the coastal territory, killing over 5,200 Palestinians.

Hijazi says the pattern of Palestinians executed by Hamas on collaboration charges during Israeli military offensives is a tool of revenge, fear and ultimately control.

“What we saw is arbitrary acts that punish and instill fear rather than actions of a military nature,” the researcher said.

“These are grave human rights abuses, and violations of international humanitarian law. Killing people while in custody is a war crime, so is carrying out torture.”

One of the men executed on August 22 was Atta Najjar, a former PA police officer with a mental disability serving a 15-year prison sentence imposed by a military court for “collaboration.”

His brother said that his body showed clear signs of brutal torture while in Hamas prison custody.

“His arms and legs were broken… his body was as if you’d put it in a bag and smashed it… His body was riddled with about 30 bullets. He had slaughter marks around his neck, marks of knives… And from behind the head – there was no brain,” he told Amnesty.

“He was heavy, like when you put meat in a bag; no bones. His bones were smashed. They broke him in the prison.”

At least three other men died in prison custody after being arrested and tortured by Hamas security forces on accusations of collaboration, Amnesty said.

Effectively abducted by Hamas security forces, testimonies from members of Fatah, former PA security officers, and suspected collaborators held in Hamas jails include allegations of being beaten by gun butts, truncheons, hoses, and wires, and also being burnt by fire, acid and hot metal.

Some of those detained were tortured in a disused outpatient’s clinic on the grounds of Gaza City’s Shifa hospital, used to treat the thousands of Palestinians injured during Israel’s military offensive.

For many families of the victims in Gaza the social stigma of alleged collaboration makes it even harder to seek justice for the killing of their loved ones, with many worrying about reprisal attacks.

“There is nowhere to go in Gaza. After three destructive wars and the blockade people are more and more powerless,” Hijazi says.

“Victims and family members have nowhere to go and when they do complain they have been shut down or told they are not welcome.”

Amnesty called on the Palestinian Authority and Hamas to “cooperate with independent and impartial international investigative mechanisms”, and to bring “suspected perpetrators” to justice.

Hamas spokesman Fawzi Barhoum rejected the Amnesty report’s findings, saying it lacked “professionalism and credibility and is deliberately exaggerated, without taking into account all sides or verifying information.”