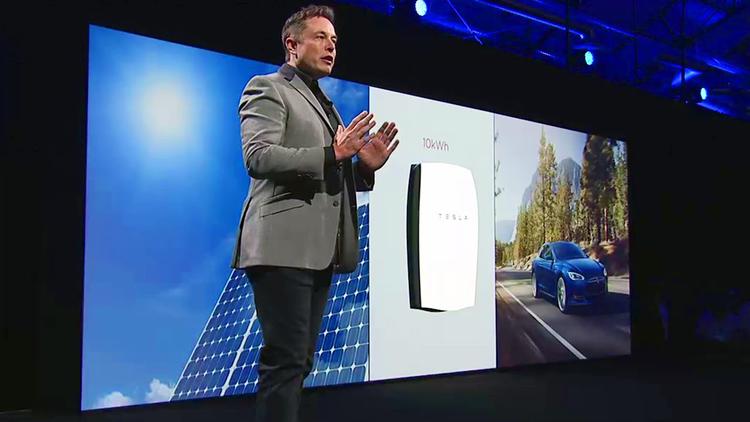 By Michael McElfresh | (The Conversation) | –

The spread of cost-effective batteries will fundamentally change the way the electric grid operates. Combined with other innovations, batteries in homes and businesses will transform how people and businesses treat electricity.

Along the way, these batteries will improve the efficiency and reliability of the grid overall.

Right now, most power is generated at large power plants and distributed to consumers. Electric energy storage allows a two-way flow of power, which offers some significant advantages for support of the power grid. For example, storage is particularly useful for offsetting the intermittent nature of wind and solar photovoltaics, which don’t produce power on demand as a fossil fuel power plant does.

For an individual consumer, having a battery behind the meter provides a great deal of flexibility in managing energy use. Batteries allow consumers to cut their electric bills by reducing how much power they consume during peak hours when power costs more, which is the case in many states such as California.

Homes with rooftop solar panels and batteries can actually use energy from their solar systems during power outages and, with a modest amount of storage, have sufficient power to last for days if the grid is out. And with enough storage, they can disconnect from the grid indefinitely – a development utilities fear.

A number of states have net metering, programs in which utilities purchase the excess electricity from solar panels that’s fed into the grid. In combination with net metering, behind-the-meter storage creates the opportunity for customers to buy power from the grid when prices are low and then sell stored energy from batteries when prices are high. This practice, known as arbitrage, has led to concerns at utilities which have levied large additional charges for equipment installations in some places.

Commercial and industrial customers stand to benefit from behind-the-meter storage as well. They can reduce their usage during times of peak demand and cut so-called demand charges – fees for maximum power usage – that can dominate how much they pay for energy.

From the perspective of the power grid, electric vehicles (EVs) can in many respects be considered a variation of behind-the-meter storage – they just happen to be mobile.

EV batteries can hold a significant amount of energy. The Nissan Leaf, for example, holds 24 kilowatt-hours, while an average house will use 30 kilowatt-hours per day, so a car battery could provide backup power during an outage.

But electric cars create challenges for grid operators. Because they draw so much current during charging, there is the potential to overload circuits that serve neighborhoods. In order to mitigate this and avoid the cost of upgrading the infrastructure, some utilities offer, or require, special tariffs that reward EV charging at night when energy demand and prices are low.

By charging when the power use is low, EVs can help flatten the typical load curve of the grid and draw power at off-peak hours at night.

Since EVs are pulling power off the grid, they can also offset excess power production from wind in particular, which often generates more power than can be used late at night. That can help generators avoid the negative pricing – when excess power reduces the real-time price of power to less than zero – sometimes associated with excessive wind generation conditions.

Meanwhile, EVs can address the decreasing power sales utilities have been experiencing by adding what is a essentially another power-hungry appliance to their monthly bills.

Close on the horizon is so-called vehicle to grid (V2G) technology. Standards will finally make it possible to use the EV battery in two-way operation with utilities. The University of Delaware, for example, has experimented with ways to connect parked EVs to the electric grid. When grid operators need a short burst of power or have excess power, they push power back and forth into the EVs’ batteries. Owners could be paid for these services.

A real game changer, however, would be if utilities could manage the behind-the-meter storage with another technology known as demand response – or cutting power use at key times during the day.

Utilities used to make deals with large energy users, such as factories, and call them on the phone to cut power use during peak power days. For example, in the middle of a hot summer day when the load from air conditioning is high, grid operators struggle to meet the demand. Cutting power during those peak hours gives them more capacity to avoid brownouts. And in exchange for agreeing to reduce power on peak days, customers get some sort of payment.

The phone calls of old evolved into automated systems. And eventually, in deregulated markets, businesses formed that collect the demand response commitments from multiple large energy users. Then they sell that capacity to reduce power when needed on the daily energy markets. This has been an effective method for reducing dependence on the polluting and expensive generators that only run for those few weeks of peak needs.

The power of connected storage

More recently utilities – particularly those with hourly pricing plans such as ComEd in Illinois and Austin Energy in Texas – have begun experimenting with demand response in the residential market.

Smart thermostat maker Nest uses its internet-connected thermostat to respond to demand response requests on peak demand days. Customers can respond to a day-ahead phone notification by choosing to opt out of the event or they can simply adjust the thermostat to opt out after the utility has given the signal.

Some more recent demand response experiments involve hour-ahead notification. So far these experiments have mostly dealt with adjusting thermostats to reduce loads, but appliances are now being sold with the ability to use real-time pricing for operating decisions.

What if the behind-the-meter storage could be dispatched by demand response signals? If utilities could draw on the energy stored in behind-the-meter batteries and EVs, it could have a range of benefits. The connected storage could lower power costs by eliminating some peak generation needs and provide a buffer for variable wind and solar power.

For the consumer, energy storage enables a whole new way to look at home electricity use. It can provide energy security, lower energy costs and eventually offer an opportunity to become part of the market for buying and selling power.

To read more about the changing electric grid, see Why rooftop solar is disruptive to utilities – and the grid.