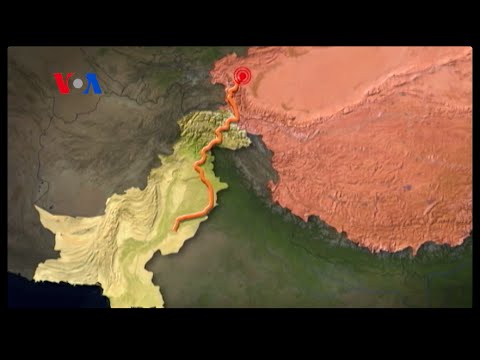 China and Pakistan announced, with considerable fanfare in Islamabad, a $46 billion dollar investment program to build a transportation corridor from the western Pakistani port of Gwadar to Xinjiang region in northwestern China. In time, the route will link with Chinese railways bringing Afghanistan’s wealth to world markets.

The agreement will give China a land route with the Middle East and South Asia that does not pass through potentially-contested chokepoints near Taiwan, the Philippines, Vietnam, Indonesia, and India. The move may bring greater prosperity to the region but there are risks of greater tensions and unrest.

The arrangement is not being welcomed in India. Its security bureaus see it as part of China’s “string of pearls” strategy of surrounding India with potential foes.. India knows well that the recent deal was preceded by the announced sale of eight Chinese submarines to Pakistan.

China is not acting artlessly. Only last September, it inked a $20 billion arrangement with India to modernize its railways, develop industrial parks, and allow Indian products greater access into China. The aim of the Pakistani deal, then, may be less to bolster China and Pakistan vis-a-vis India than to strengthen China’s influence with both countries and to benefit from greater cooperation and trade between the rivals.

There will also be concern – in India, the US, and elsewhere – that China will one day establish a sizable naval base at Gwadar, the port that China developed over the last few years which is three hundred miles from the Strait of Hormuz. Pakistan publicly offered such a base at a Beijing parley but China rather pointedly declined, much to Islamabad’s embarrassment. Nonetheless, the prospect of a base so near vital oil sources will appeal to parts of the Chinese state, especially the navy whose ambitions may be increasingly influenced by navalist geopolitical thought.

The 1800-mile route will pass through some of the most unstable parts of the region and likely aggravate local discontent. The southern terminus is in Baluchistan, a mineral-rich region comprising forty percent of Pakistan’s territory. Unfairly deprived of its autonomy by Pakistan over the years, at least in the view of separatists, the region has seen continuous unrest.

Prosperity in Pakistan has not been shared in a remotely equitable manner, especially in the Baluch region. The boon that the China deal promises is unlikely to usher in a new era and wealth will continue to go disproportionately to Punjabis in military and business elites. Baluch grievances will be underscored; the ongoing insurgency will almost certainly grow. Chinese workers have been targeted in recent years; they will be again. This problem contributes to Beijing’s coolness to a military base at Gwadar.

The transportation network will not run through restive Pashtun tribal areas. However, Afghan iron, copper, rare earths, and other minerals will pass through the storied Khyber Pass, a Shinwari- and Afridi-Pashtun region. Pashtuns have never been adequately integrated into Pakistan. They have enjoyed considerable autonomy stemming from nineteenth-century treaties with the British that Islamabad has generally respected. The Pakistani Taliban has battled state encroachments and will continue to do so. Regionalist and fiercely Islamist, the Pakistani and Afghan Pashtuns are unlikely to welcome a greater Chinese presence, even if it comes at the expense of the US.

The northern terminus is in China’s northwestern Xinjiang region, home to ten million Uighurs who resent the increasing economic and political dominance of the politically-dominant Han Chinese. Uighurs have rioted in Xinjiang and launched attacks in train stations in eastern and southern China. Perhaps most unsettlingly, Uighurs have gone abroad, often by way of Vietnam, to learn the skills of war from al Qaeda fighters in eastern Afghanistan and the Islamic State in the Middle East. The link to South Asia and the Middle East will bring new wealth, greater Han dominance, and a capacious path for fighters returning to the Uighur homeland.

The investment program with Pakistan will make China even more of a world actor. China is heady with its remarkable economic success over the last few decades. But the zeal to return their country to its leading position in the world may cause it to overlook the problems and perils that come with involvements around the world.

Tensions with India and danger of insurgency aside, China is tying itself more closely to Pakistan – a country that is politically unstable, desperately poor and overcrowded, and held together, if tenuously, by an extreme form of Islam. Most importantly, China will have to steer clear of being drawn into the ambitions of Pakistan’s officer corps and intelligence services, the leaders of which have undoubtedly convinced themselves that they now have China firmly on their side.

Brian M Downing is a political-military analyst, and author of The Military Revolution and Political Change and The Paths of Glory: Social Change in America from the Great War to Vietnam. He can be reached at brianmdowning at gmail d o t com.