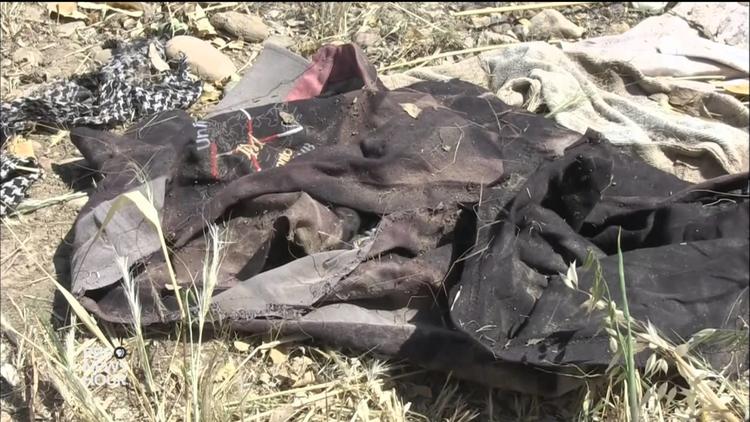 It’s been almost a month since the Islamic State group was expelled from Tikrit. NIQASH went there and found a graffiti-covered ghost town ruled by opposing groups of gunmen, none of whom trust one another.

In Basha Street in the centre of the Iraqi city of Tikrit, there are several buildings that have been completely destroyed. On the walls that remain there is graffiti: “These houses belonged to members of Daash,” the writing says, referring to the extremist group known as the Islamic State by their Arabic acronym. Their destruction was clearly punishment for membership of the extremist group.

One of the houses belonged to Nasser al-Amounah, a well known local and a leading member of the extremist group. His house has been almost completely levelled. Only one wall of the building remains standing and on it is written: “This is the house of the criminal, Nasser al-Amounah”.

A combination of pro-government forces expelled the Islamic State, or IS, group from Tikrit in early April. But as yet there’s no real civilian life here, no schools open, hospitals, courts of justice or police stations active. Residents of the city who fled their homes some time ago – the city was largely empty when the security forces arrived to fight the IS group – remain displaced, in cities around Iraq waiting for an official decision as to whether they should return. In fact, the city is more like a ghost town at the moment, populated only by wraiths from the various kinds of security forces in charge of different areas around the city.

Getting to Tikrit is hardly fun at the moment either. The soldiers deployed along the highways leading from Baghdad to Tikrit look terribly tired and they all seem to be in a bad mood. They certainly don’t trust strangers. They act as though everyone coming through here may as well as be a member of the IS group, until they can prove otherwise.

Once inside Tikrit, it’s not particularly easy to move around. There are three types of security forces inside the city and each controls its own areas. The first and most powerful is composed of members of the unofficial Shiite Muslim militias, composed of volunteers who took up arms to fight the IS group. Those most obvious here are Hezbollah in Iraq, the League of the Righteous, (or Asaib Ahl al-Haq in Arabic) and the Najbaa brigades.

The second strongest organisation in Tikrit is the official Iraqi army, including counter terrorism units and special forces. And the third group here are the local police, who appear to have only limited resources and powers.

NIQASH was asked not to report which areas are under control of which groups for security reasons. Additionally all of the forces present in Tikrit are not happy to let those they consider “strangers” take pictures in the areas they supervise. After journalists reported on some members of the Shiite militias who burned and looted property and exacted their revenge on locals they thought were IS members, the militia men do not trust journalists. However both the Shiite militias and the soldiers were happy to give visitors pictures they had taken themselves.

It’s difficult to travel around the city, even for members of the different groups. The security forces in charge of one area don’t trust those in charge of the other areas and any movement between neighbourhoods needs to be coordinated by their leaders. In some cases coordination hasn’t happened and threats have been made; there have even been some minor skirmishes apparently.

“Every now and then there are clashes between the Iraqi army and the Shiite militias,” one senior police officer told NIQASH, on condition of anonymity. “There are conflicts about who is in charge of what. And the army have been ordered by the government to search for vandals and thieves but there are huge problems in completing this mission.”

“We don’t actually know who is in charge of Tikrit,” he complained. “None of the different forces – the army regiments or the Shiite militias – respect one another’s decisions. Trying to coordinate with these different groups is also very complicated.”

As one travels around Tikrit some of the loudest sounds come from the vehicles belonging to the Shiite militias who tour the streets; they have religious songs blaring from their vehicles continuously. You also see other vehicles who distribute food to fighters all over the city; the food is prepared in large pots on makeshift, road side kitchens and the cost of the meals is paid for with donations from Shiite Muslim tribes in southern Iraq.

Rumour has it that the Iraqi government hasn’t been able to deliver food to the soldiers and the militias’ fighters in some cases because of corruption.

One of the most famous parts of Tikrit is the area where many palaces are located. As the BBC reports: “Tikrit’s palaces have a somewhat mythical status. The city is widely cited as having the highest number of luxurious palaces built during Saddam’s time”. Former Iraqi leader Saddam Hussein was from Tikrit and during his reign, anywhere between 60 and 100 palaces were built here.

After passing through various hands – from Hussein to the US military to the Iraqi government and then to the IS group – the palaces have now become a base for the Shiite militias. Nobody can even approach the area without express permission from the militia leaders. One of the palaces is thought to be the site of one of the IS group’s most heinous massacres, where they killed around 1,000 young soldiers and there are excavations going on in the palace gardens to find corpses.

Elsewhere in the city, houses and buildings and even mosque walls are covered in graffiti, often of a religious nature, or praising the heroism of the fighters from the Shiite militias who participated in the fight against the IS group here. They say things like: “The soldiers of Karbala were here”. And: “The heroes of Basra defeated terrorism here”. Some of the slogans have apparently been removed on orders from the Iraqi government because they were written in Persian, a reflection of the Iraqi government’s growing unease at Iranian influence among the Shiite militias.

In the western part of the city, a former police headquarters has become a central point for all of the forces here. There are military and police vehicles parked outside as well as unmarked cars and trucks used by the Shiite Muslim militias. Inside the officers and militia leaders have apparently been discussing how to facilitate the return of civilians to their city. But the subject is a complicated one and it doesn’t seem like much progress has been made.

The former administrators of the city remain in Baghdad or Samarra and they organise anything they need to from there. “The Shiite factions want revenge and they believe that we are traitors,” one of the officials from the provincial administration told NIQASH anonymously because he was not authorised to speak to media. “I have no idea why they treat us this way when we actually helped with the liberation of the city.”

If civilians do start to return they would not only face threats of vengeance from Shiite militias and even from local police (who were also endangered by the IS fighters in Tikrit) but also from tribal conflicts. There have already been some retaliatory murders apparently – local police acted against residents who had been affiliated with the IS group, who they say were part of IS sleeper cells inside Tikrit even before the city fell to the extremists.

The Shiite militias who control the largest part of Tikrit say that they’re continuing to investigate any leads that might reveal who here was affiliated with the IS group. Ali al-Moussawi, who is associated with the Najbaa brigades says that fighters under his command found identity cards and passports that belong to members of the extremist group. “Some of the passports belong to foreigners,” he noted.

Al-Moussawi said that they had also found planning documents that indicated how the IS group were administrating the city and two days ago they discovered a secret tunnel. He thinks that IS fighters used the tunnel to move around the city and to hide from opposing forces. The tunnel had been rigged with explosives, a trap set for al-Moussawi’s men, but they managed to defuse the bombs.

This is another impediment to the return of civilians to Tikrit. Local police and special army units are hunting for bombs and booby traps, in the form of improved explosive devices, throughout the city. Not a day goes by without finding new bombs and they believe there are hundreds still hidden.

Meanwhile Majid Abu Wisam, who is originally from Tikrit, is conducting a different kind of clean up operation, a far more mundane one. Together with a group of other locals, they are trying to clean the city up. And they are more hopeful than many. Despite the absence of other civilians and the destruction, Abu Wisam says he still believes the city will be rebuilt.

“It will be as beautiful as it was before,” he says optimistically. “But it will take some time,” he admits.