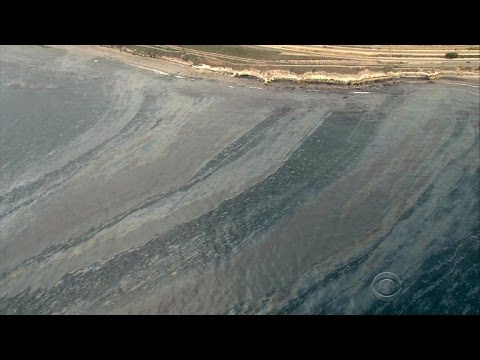 About 25 miles north of Santa Barbara, CA Refugio State Beach, a quiet white-sand surf and popular family beach, turned black this morning from a crude oil spill that occurred Tuesday afternoon. The reported cause of the spill is a ruptured pipeline owned by the Houston,TX based Plains All American Pipeline company. The pipeline, built in 1991, designed to carry about 150,000 barrels of oil per day ruptured and an estimated 21,000 gallons of oil leaked from the pipeline into a storm drain that drains into the Pacific Ocean. Crude oil has already polluted over 4 miles of scenic Santa Barbara, California coastline…

Crews and volunteers are working tirelessly to clean up the beach in time for the Memorial Day weekend however there is a bigger issue at hand. Refugio State Beach is home to biologically diverse populations of fish, plants, plankton, crustaceans, birds, and sea lions that all play a pivotal role in health of the marine and coastline ecosystems. Even though a clean up is aesthetically possible, the long term effects of oil spills last well beyond what we humans can actually see. And, though relatively small, this spill is nothing compared to the 3 million gallons of oil that spilled into this region in 1969’s, of which Santa Barbara is still feeling residual effects.

Between the drought, and now another oil spill, it seems like southern California just can’t seem to get a break. If it isn’t our own wrongdoing, it is mother nature, if it isn’t gang violence, it is economic imbalance, if it isn’t a wild fire, it is a failed attempt to ban offshore drilling in Santa Barbara.

Currently the beach is closed and the campsite nearby has been evacuated.

Plains All American Pipeline said in a statement that the pipeline was shut down at about 3 p.m. Tuesday and that he culvert was blocked to prevent more oil from flowing into the ocean.

As with all the oil spills that have befouled our oceans and coastlines, you can expect to see volunteers, the Coast Guard, and Federal funds, aiding in an effective and timely clean up. As for Plains All American Pipeline, more information is surely to “spill” about the exact cause of the spill and if it could have been prevented.

PS: Juan Cole adds that Santa Barbara residents who can afford one and don’t drive an electric or hybrid plug-in vehicle and who don’t fuel them from solar panels on their roofs should perhaps now rethink depending on petroleum for transportation.