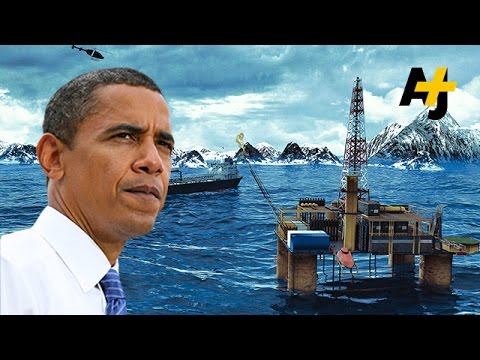 President Barack Obama’s reputation as a climate leader took a hit on Monday when his administration gave its blessing for Shell to begin drilling exploratory oil wells in the Arctic. The move contradicts recent positive actions the US has made on climate, including last year’s historic emissions reductions deal it with China. The move also flies in the face of recent peer reviewed findings that there is absolutely “no climate-friendly scenario in which any oil or gas is drilled in the Arctic.” Now, the Obama administration’s willingness to allow oil and gas drilling operations to begin in one of the most sensitive parts of the planet, where there is a 75% change drilling operations will result in a spill, weakens Obama’s claims that climate change will be one of his “legacy” issues. While the Obama administration failed to stand up to Shell, the company still faces a number obstacles before drilling can begin in the waters north of Alaska. Shell still needs to secure seven other outstanding permits and deal with a fight over the oil giant’s plans to moor rigs near Seattle. Seattle’s mayor remains a vocal critic of Shell’s plans to have its Arctic drilling rigs dock at the Port of Seattle and a number of citizens plan on blocking the rig’s entrance to the port by arranging a kayak flotilla this weekend.

Allowing any oil and gas drilling in the Arctic is a failure of the United States to protect the world from the worst consequences of climate change. According to a peer-reviewed scientific study published in Nature, the world must choose between drilling for Arctic oil and maintaining a safe, liveable climate. The study found “no climate-friendly scenario in which any oil or gas is drilled in the Arctic.”

Greenlighting Shell’s plans to drill in the Arctic puts the President Obama’s climate legacy in peril. While actions like the historic emissions deal reached with China last year and the veto of the Keystone XL pipeline this year have legitimized Obama’s strong words on climate change, keeping Shell from drilling in the Arctic fails to build on the momentum leading up to this year’s highly anticipated Paris climate meetings.

The big risks associated with Arctic drilling are fueling public outcry against Shell. A recently released Interior Department study found that drilling in the Arctic comes with a 75% chance oil spills. Activists in Washington state and elsewhere have been mobilizing to draw attention to the severe risks associated with Arctic drilling for some time. In a matter of days citizens plan to risk their lives by joining in a kayak flotilla that seeks to block Shell’s drilling equipment from docking in the Port of Seattle before it sets out for the Arctic.