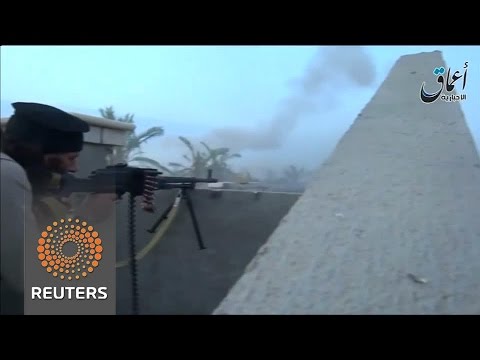 Baghdad was shaken by the news that the Iraq army and police in Ramadi ran away from the advancing forces of Daesh (ISIL, ISIS). As a result, good American weaponry again fell into the hands of the extremists.

Diya’ al-Wakil, former Iraqi military spokesperson, has the same question, and he attempted some answers.

He asks: Why did the army and police and counter-terrorism forces retreate before the advance of the Daesh fighters?

Was the retreat a result of strategic or tactical errors?

What about psychological warfare?

Why would forces supported by close air support and heavy artillery retreat before small guerrilla groups?

Al-Wakil explains that Daesh takes cover in densely populated urban alleyways and fights from them, so that it is impossible to bomb them. This technique, he says removed the advantage the regular army has, since it becomes impossible for the the coalition air force to strike the enemy or for heavy artillery to be deployed.

Next, there is poor coordination between units. The coalition’s air forces were not effective because thy did not give the required support to the fighters on the ground because of poor integration.

The political divisions in Baghdad over whether to arm Sunni tribal levies properly and over whether to allow Shiite militias from Iraq’s south to deploy in Sunni al-Anbar province took these ancillary forces out of the fight.

Poor morale in the Iraqi army and effective psychological warfare by Daesh. This must be effectively countered if the army is ever to make progress. (He means that Sunni troops and police in al-Anbar Province are targeted by Daesh as “apostates,,” playing on the guilt some of them feel because they are serving a Shiite government.)

Ahmad al-Shamari argues that the Shiite militias or popular mobilization forces are not nearly as undisciplined and sectarian as they are depicted in the press.