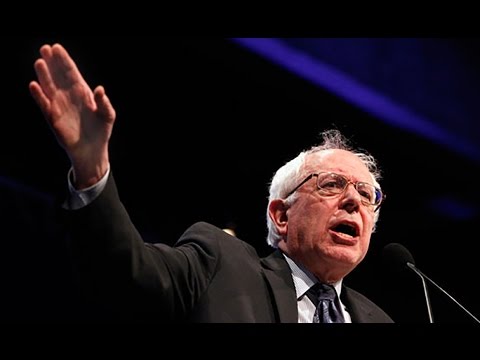 Sen. Bernie Sanders, the presidential candidate for the Democratic nomination, has trouble being taken seriously by the corporate media, what with him being a democratic socialist and all.

If you go to Google News and put in his name, you get headlines about him being nothing more than a protest candidate, or having “odd views,” or promoting “dark age economics.”

But Sanders’s positions are quite mainstream from the point of view of the stances of the American public in general. Of course, the 1%, for whom and by whom most mainstream media report, are appalled and would like to depict him as an outlier.

Sanders is scathing on the increasing wealth gap, whereby the rich have scooped up most of the increase in our national wealth in the past twenty years. The average wage of the average worker in real terms is only a little better than in 1970; the poor are actually poorer; but the wealth of the top earners has increased several times over.

Some 63% of Americans agree that the current distribution of wealth is unfair. And in a Gallup poll done earlier this month, a majority, 52%, think that government taxation on the rich should be used to reduce the wealth gap. This percentage is historically high, having been only 45% in 1998. But there seems to be a shift going on, because Gallup got the 52% proportion in answer to the question on taxing the rich both in April and again in May of this year.

Bernie Sanders’ position is that of a majority of Americans in the most recent polling!

Even Socialism is coming up in the world. Some 36% of Millennial youth (born in the 1980s and 1990s) have a favorable view of Socialism, compared to 26% of the general population.

Sanders wants to get big money out of politics.

A majority of Americans oppose the Supreme Court “Citizens United” ruling, one of a number of such rulings that have increased the ability of the super-wealthy to influence politics. A good half of Americans support federally financed political campaigns so as to level the playing field.

On this issue, Bernie Sanders is the most mainstream of all the candidates. The others are in a part of the political spectrum that by the polling represents a tiny lunatic fringe, in opposing significant campaign finance reform.

Sanders is very concerned about student debt and wants to do something practical to combat this problem.

Some 79% of Americans believe that education beyond high school is not affordable for everyone. And some 57% of people under 30 believe student debt is a problem for youth.

Bernie Sanders’s hair is on fire about the dangers of global warming and the need to take practical steps to combat it.

According to a very recent Yale/Gallup poll, Some 71% of Americans believe global warming is occurring, and 57% are sure that human activity (emitting greenhouse gases like carbon dioxide) is causing it, while another 12 percent think the warming is at least partly human-caused. That’s 69% who blame human beings wholly or in part.

50% are very or somewhat worried about global warming, while another 28% is at least a little worried. About 48% believe that global warming is either already having a bad effect on people or that it will do so in the next decade.

Even among Republicans, 48% say that they are more likely to vote for a candidate who wants to fight climate change.

Sanders is again squarely in the mainstream on this issue from the point of view of public opinion.

So when you hear Republican candidates say that there is no global warming or that it isn’t for sure human beings are causing it, and in any case nothing needs to be done about it, they are not mainstream. Less than 30% of Americans and as few as 22% hold those views. This is the percentage of Americans who believe a UFO crashed in Roswell, N.M.

Climate change denialists are kooks, and if we had an honest media, it would call them kooks.

Instead, Bernie Sanders, whose positions are shared by strong majorities of Americans, is being depicted as the one who is out of step.