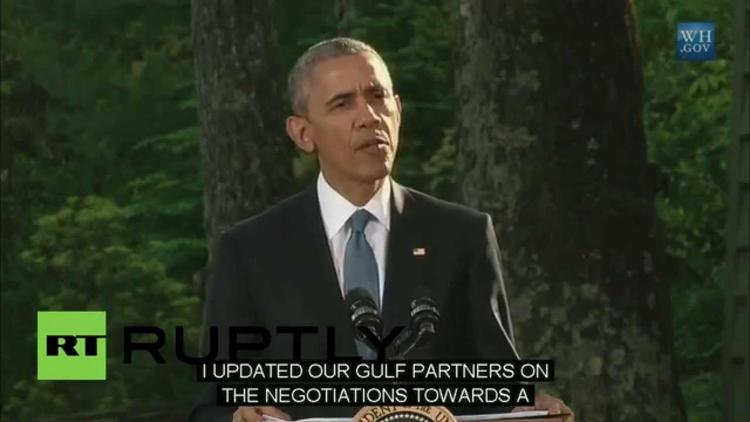 The countries of the Gulf Cooperation Council came to meet President Barack Obama at Camp David in search of a renewed, formalized US commitment to their security. They came away disappointed. Though they did get firm oral commitments, there is no prospect of formal treaty obligations binding the US to defend them.

The GCC was formed in 1981 to strengthen relations among six states: Kuwait, Qatar, Bahrain, Oman, the United Arab Emirates and Saudi Arabia. They are all monarchies, all are ruled by Sunnis or Wahhabis, all are on the Persian Gulf (which they call the Arab Gulf), all have substantial expatriate guest worker populations, and all have fossil fuel riches (though Bahrain is the poor cousin here). With the exception of Saudi Arabia they all have small Arabic-speaking citizen populations and therefore cannot hope to field armies to defend themselves. They were shaken by the Arab youth revolutions of 2011 and the rise of populist Muslim movements, and have come to fear uprisings from below. The combination of being small, weak, elitist and fabulously wealthy makes them understandably nervous about external threats, as well. Iraq’s attempt to erase Kuwait in 1990-91 sent chills down all their spines. More recently, Shiite Iran’s alliance with Iraq and with Houthi-dominated Yemen have made them feel surrounded and besieged.

Qatar is an example here. Its citizen population is less than 300,000, i.e. something like Lincoln, Nebraska or Fort Wayne, Indiana, inside city limits. It has nearly 2 million guest workers, mainly from South Asia (India, Pakistan, etc.) Its government has a bias toward middle of the road political Islam (e.g. the Nahda or Renaissance Party in Tunisia). Qatar is a major producer of natural gas, but tapped into a field that is shared with Iran. Iran occasionally complains about this and makes threatening noises, and I’m told Iranian ships sometimes make feints toward Qatar. Iran has a population of 77 million. Despite this tension, Qatar in most ways has good or correct relations with Iran, but it gave the US an air base at al-Udeid just to be on the safe side.

Since the GCC countries have depended for some time on the US for their security, they have been disturbed by the US rapprochement with Iran under Obama. They would like to see Iran’s nuclear enrichment program shut down and aren’t sure Obama can put sufficient safeguards in place to ensure it is not weaponized at some point down the road.

They also see Iran’s cementing of alliances with Lebanon and Iraq and its support for the Bashar al-Assad government in Syria and for the Houthi rebels in Yemen as a new and alarming flood of non-Arab, Shiite hegemony in an Arab region that they had previously influenced. Lebanon’s post-Civil War government was dominated by the figure of Rafiq Hariri, who had made his fortune in Saudi Arabia and was seen as an envoy of King Fahd. Today, Lebanon is deeply divided but the preponderance of political power probably lies with the Shiite Hizbullah (an Iran ally) and its Christian partners. In the 1970s and 1980s, Saudi money kept the Syrian government afloat during the expensive intervention in the Lebanon Civil War. Saddam Hussain’s Iraq was kept going during the Iran-Iraq War of the 1980s by GCC loans and gifts. The Arab nationalist government of Ali Abdallah Saleh in Yemen depended deeply on Saudi aid to survive. Now in each case, Saudi and GCC influence has been replaced by that of Iran.

I was in Qatar last week for an Aljazeera Forum and as I reported in The Nation, the mood of Arab intellectuals and politicians there was jittery about Iran.

Some of the Gulf countries are still not militarily very well equipped, and they want access to more sophisticated US weapons. They want to be reassured that Obama is not handing Iran a nuclear weapons capability (Iran denies that it wants a nuclear bomb and denounces it as a tool of the devil). They would ideally like to see the US lead them into a Middle East NATO-type organization of collective security. But every such mutual defense treaty the US signs has the potential for dragging it into unwanted wars, and after the Iraq imbroglio neither Obama nor the rest of the US government would be eager to take on such commitments.

One compromise is for Obama to designate each of the GCC countries a “major non-NATO ally.” This is a status that only Bahrain currently enjoys in the Gulf. It is fairly pro forma and does not involve mutual defense commitments. But the status does give a country special access to high-tech US weaponry and initiates joint military maneuvers.

Obama’s apparent hopes of a grand bargain with the GCC such that they would accept his rapprochement with Iran were dashed when King Salman of Saudi Arabia abruptly cancelled his attendance at the summit and snubbed the president. Likewise, the king of Bahrain went to a horse show in the UK rather than be at Camp David. Bahrain is the HQ of the US Fifth Fleet, so he knows the US needs him. Bahrain and Saudi Arabia are annoyed with Washington for mildly criticizing the crackdown on the Shiite majority in Bahrain, and for suggesting that maybe the aerial bombing of Yemen is killing a lot of civilians and not obviously accomplishing any military goals. (Saudi Arabia’s crown prince and no. 3 man did come, and those who say that this is opportunity for Obama to get to know the next generation of leaders are not wrong; but he was still snubbed).

In short, the GCC monarchs were seeking unqualified support from Washington, but Obama just isn’t an unqualified kind of guy.

In his speech after the summit, Obama asserted that his Arab guests were reassured about his Iran negotiations, and he reaffirmed US commitment to their security. He also chastised Iran for “meddling” in the region and made it clear that such regional influence on the part of Tehran is a separate issue from the nuclear enrichment program and would be combatted by the US and its allies. It was something. It wasn’t enough.

The US may in any case be the only game in town for the GCC. The other great powers, Russia and China, are interested in a rapprochement with Iran just as the US is. One place the GCC is going for support besides the US is France, but it can hardly offer them a security umbrella. And the French business class is salivating over the possibility that Iran will be opened to them, as well. The GCC may just have to get used to a new world in which Iran is not pinned down by crippling sanctions.