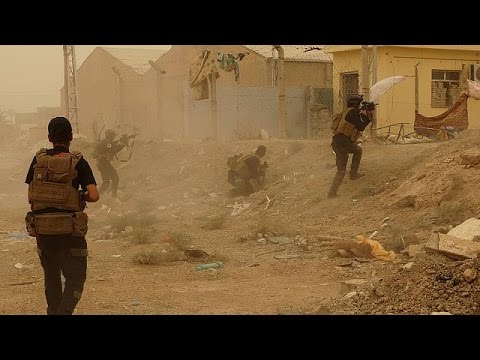 Al-Zaman (The Times of Baghdad) reports that Iraqi Prime Minister Haydar al-Abadi met Tuesday with leaders of the Shiite militias to plan the retaking of Ramadi, a Sunni Arab city about 78 miles due west of Baghdad that fell on Sunday to Daesh (ISIS, ISIL) as the Iraqi armed forces there collapsed.

Ramadi is potentially a base for attacking the Shiite shrine city of Karbala, with its tomb of the Imam Husayn, the martyred grandson of the Prophet Muhammad. Daesh could also use it to gain control of nearby Iraqi military bases and their weapons depots.

The Shiite militias have rallied, now that PM al-Abadi has lifted his earlier injunction against them operating in heavily Sunni al-Anbar Province, and are making plans to push Daesh back from Ramadi.

Hadi al-Ameri, head of the Badr Corps and over-all leader of the Popular Mobilization Forces or Shiite militias, said Tuesday that the military task of taking back Ramadi is actually less complicated than campaigning north of Baghdad in Salahuddin Province (where the militias and the Iraqi Army have taken Takrit and Beiji from Daesh).

He said that 25,000 militiamen were already gathering for the fight, which would begin as soon as the volunteers could be assembled and armed. He said they would be joined by Sunni tribal levies and American advisers, and would be given close air support by the US and its anti-Daesh coalition.

The Badr Corps is the paramilitary of the Badr Organization, a pro-Iran Shiite party. It was founded as a branch of the Iranian Revolutionary Guards in the 1980s and originally was attached to the what is now the Islamic Supreme Council of Iraq, a political party founded at the instance of Ayatollah Khomeini.

So that al-Ameri is talking about cooperating with American military advisers on the ground and receiving American, Jordanian and other close air support is quite remarkable and a sign of the strange bedfellows that Daesh has brought together against itself.

Although some observers have stressed Sunni-Shiite unity insofar as some Sunni clans of Eastern al-Anbar have fought against Daesh, the clansmen are dejected about the fall of Ramadi and the ignominious retreat of the Iraqi army.

BBC Monitoring quotes from al-Mada, saying it reported that the head of the Sunni Al-Bu Fahd, Rafi Abd-al-Karim al-Fahdawi remarked: “Al-Bu Fahd tribes in Al-Khalidiyah areas, eastern Al-Ramadi, deployed around 4,000 fighters to protect their areas from any attack by Da’ish.” He added that they are in a “state of disappointment and despair” and that “the morale of his tribe’s fighters deteriorated after the security forces’ withdrawal from Al-Ramadi and the government’s failure to meets its promises to supply them with weapons…” Another clan leader said, “some tribes abandoned fighting because they did not get any weapons or support” from Baghdad.

At the same time, there are signs of Baghdad coordinating with Iran. PM al-Abadi met with the Iranian defense minister, Brig. Gen. Husain Dehqan, in Baghdad on Tuesday evening and underscored that the security of Iran and Iraq are inseparable as they fight terrorist extremism (i.e. Sunni terrorist extremism), pledging that Iraq would never allow an attack on its eastern neighbor.

Al-Abadi also said, “we do not support the war on Yemen” and urged that the conflict be settled by negotiations among Muslim countries. The statement might underscore his alliance with Iran, but it is sure to anger the Gulf Cooperation Council states led by Saudi Arabia, who see the Houthi rebels in Yemen as agents of Iran.

Al-Abadi plans to head to Russia, where he hopes for support and weapons from Vladimir Putin. Since Daesh has a Chechen contingent, the Russians want to see it crushed, lest it spill back over onto Chechnya, an ethnic Muslim province in the Caucasus that has repeatedly staged secessionist rebellions against the Russian Federation. They have been crushed brutally, provoking a terrorist backlash.

Russia has already provided some arms to Iraq for its current fight against Daesh.