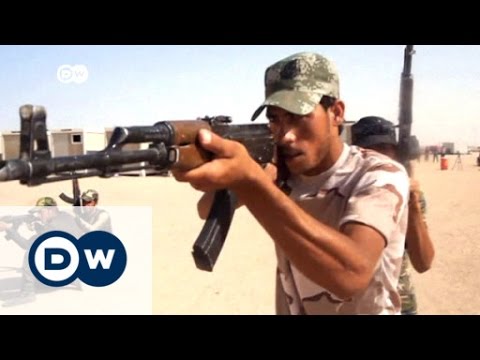 Shiite militias in Iraq, joined by some Sunni tribal levies, on Tuesday reached a university campus just to the southwest of Ramadi in what is called a “shaping operation” intended to set the stage for an all-out assault. There were some scattered firefights with Daesh (ISIS, ISIL) commandos, and the US-led coalition bombed Daesh targets around Ramadi.

Ahmad al-Asadi, a parliamentarian from the Shiite Islamic Mission Party (Hizb al-Da`wah), said that regular Iraqi army troops, police gendarmes, and counter-terrorism units, along with most of the major Shiite militias, were all joining in. He said that the campaign would swiftly take Ramadi and then go on to conquer all of al-Anbar Province (geographically Iraq’s largest, which is dominated by the Sunni Dulaym clan).

The Shiite militias say they have already taken back Ankur and Tash south of Ramadi. They also claim to have cut the roads to Ramadi off on three sides, the east, south and west, hampering Daesh reinforcements. (This makes no sense to me, since presumably the reinforcements would come down from Syria to the north, and the north is wide open all the way to the Syrian border.)

Shiite Iraqis were alarmed by the fall of Ramadi to Daesh a week and a half ago, since it brought the terrorist organization to only 78 miles from Baghdad and striking distance from the Shiite religious center of Karbala to the southeast. 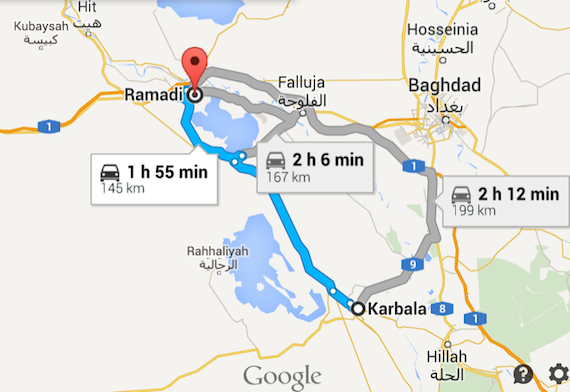 The Shiite militias or “popular mobilization forces” termed their campaign to take Ramadi away from Daesh “Here I am, O Husayn” (Labbaik Ya Husayn). Husayn, the martyred grandson of the Prophet Muhammad, is especially honored by Shiites in ritual ways beyond what is done by Sunnis, though most Sunnis also reverence him. Friday was Imam Husayn’s birthday, and a Shiite mosque in Saudi Arabia was blown up by Daesh on that day.

Hard line Salafis, influenced by the Wahhabism of Saudi Arabia, deeply object to Shiite veneration of Husayn, so the campaign’s name is a poke in their eye. In 1803, Wahhabi armies from what is now Saudi Arabia attacked the shrine city of Karbala in Iraq and looted and damaged the tomb of Imam Husayn there, viewing tombs and shrines as a form of idolatry.

If you will permit me an inaccurate analogy: It is sort of like calling a largely Catholic campaign to take a largely Protestant city the “St. Peter’s Offensive.” Protestants probably favor Paul over Peter, but honor them both. Everyone knows, though, that Catholics view Peter as the founder of their branch of Christianity, so it might be provocative to name it that way if you wanted to avoid a sectarian overtone.

Colonel Steve Warren, Pentagon spokesman, objected to the naming of the campaign, calling it “unhelpful.” He did, however, express pleasure that Sunni fighters were joining in.

After the Orthodox Caliphs, Sunnis hold that authority passed to the Umayyad Caliphate, though may contemporary academics think the Umayyad state was just an Arab kingdom, with only a minority of early Muslims investing its kings with spiritual authority.

After Ali’s assassination in 661, Shiites hold that he should have been succeeded by his sons with Fatimah, the daughter of the Prophet. These were Hasan and Husayn, and then they hold the succession should have gone to Husayn’s son, grandson and so forth until the 12th of the line. They believe the 12th Imam, Muhammad al-Mahdi, disappeared from mortal eyes as a child, and will one day return to fill the world with justice, rather as Christians await the return of Christ.

Muslims in Iraq chafed under the rule of the Umayyads, and late in the reign of Yazid I, they pleaded with Husayn to come from Mecca and lead them in their protest. Husayn answered their call, but ended up being surrounded with his family and a small contingent of supporters on the plain of Karbala in 680. Yazid’s general, Shimr, cut them all down. Husayn’s small son was pierced by an arrow. He himself was beheaded and the head was mounted on a stave and deposited at the feet of Yazid in his capital of Damascus. 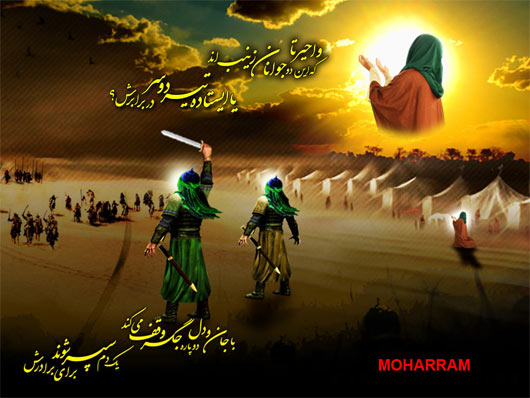 Shiite Muslims commemorate Husayn’s death annually on Ashura, the 10th of the month of Muharram, with processions, chanting and flagellation (beating the chest rhythmically or in some folk practice beating the body with whips or chains, as with some medieval Catholic practice). Many Shiites also go on pilgrimage (ziyara) to the shrine of Imam Husayn in Karbala, where a tomb was erected where he was struck down. They go especially on Arba’in, the 40th day after his death.

Sunnis do not typically practice these rituals, though some Sunnis in Iraq do join in the Arba’in pilgrimage, e.g. Husayn is nevertheless a hero to many Sunnis, and there are mosques dedicated to him in both Damascus and Cairo (largely Sunni cities). Egyptian Sunnis have given me a special pudding on Ashura in Cairo.

But the Wahhabi branch of Islam in Saudi Arabia and the Salafi Sunnis influenced by it elsewhere are sometimes hostile to Husayn. A Salafi in Islamabad once maintained to me that Caliph Yazid I was right to stop the disorder down in Iraq. Most Sunnis and all Shiites would avoid naming their children Yazid, but it is a name found among Wahhabis.

So saying “I am here for you, O Husayn” in a campaign against the Salafi Daesh in Ramadi definitely has sectarian overtones, though they are not straightforward given mainstream Sunni reverence for Husayn and the family of the Prophet in general.

DW: “Iraq launches operation against IS in Ramadi | Journal”