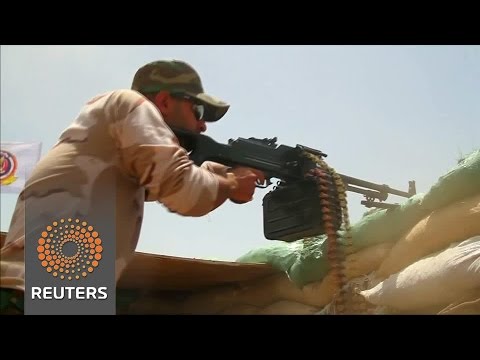 After an outcry and Pentagon criticism, the Shiite militias in Iraq have changed their name for their current campaign to take Ramadi from Daesh (ISIS, ISIL) from “I am here, O Husayn’ to “I am here, O Iraq.” A spokesman for the militias said that the two slogans say the same thing, anyway.

Husayn, the martyred grandson of the Prophet Muhammad, is especially venerated by Shiite Muslims and naming the campaign for him could have been interpreted as a sign of sectarianism. Most Sunnis don’t practice the ritual morning for Husayn in the way that Shiites do. Sunnis say they are also disturbed by the presence of Iranian advisors among the Shiite militias.

Iraqi security officials announced that a combination of the Iraqi army, Shiite militiamen, and Sunni tribal levies have already managed to take back from Daesh some of south Ramadi, the capital of al-Anbar Province. They said they had cut off the city from resupply or smuggling in of money, from the south and the west.

At the same time, the provincial council of al-Anbar Province announced that government forces had captured 25 Daesh fighters.

Iraqi formal security forces and the Shiite militias also say that they managed to position themselves inside the University of al-Anbar.

There were allegations that the Iraqi army and its militia alies were engaging in indiscriminate bombardment of Ramadi.