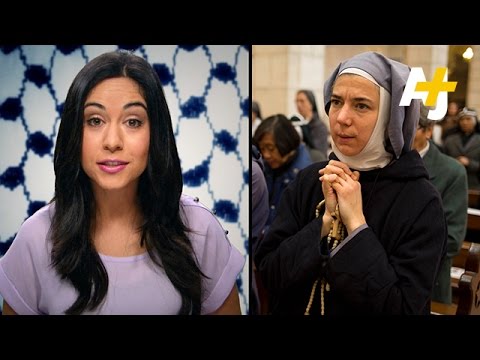 BETHLEHEM (Ma’an) — In the run up to Pope Francis’ canonization of two Palestinian nuns, President Mahmoud Abbas praises Palestinian Christians for the “distinctive dimension” their community and history gives to the Palestinian struggle.

“On this holy occasion we would like to express appreciation to our Palestinian Christian brothers for their steadfastness and effective contribution to building the Palestinian nation, and we call upon them to stay with us and not to be easily swept by the tide of migration,” Abbas said in a statement Saturday.

St. Marie Alphonsine Ghattas from Jerusalem and St. Mariam Bawardy from Ibilin village in the Galilee are to be canonized Sunday at the Vatican’s St. Peter’s square.

St. Mariam Baouardy Haddad established a convent in Bethlehem in 1876 which still exists until today.

Abbas said in the statement that recognition of Palestinian Christians by the Pope “emphasizes our unity, and affirms our determination to build a sovereign, independent and free Palestine based on the principles of equal citizenship and the values of spirituality and sublime humanity.”

The president emphasized that Palestinian Christians should be given “rights of full and equal citizenship,” as they “bear with us the difficulties of life until we achieve liberty, sovereignty and human dignity.

“Through truth and justice we can decide our own fate, and with the prayers of sincere and faithful believers all our endeavors will be realized,” he added.

The canonization comes as the Vatican announced Wednesday preparations to sign its first accord with Palestine, in what the PLO responded would be a “genuine contribution to peace and justice.”

While it will be the first time the Roman Catholic Church signs a treaty with the State of Palestine, the Vatican has recognized the state since February 2013.

Crowds of pilgrims from around the world have arrived to the Italian capital of Rome to take part in the canonization of the Palestinian nuns to take place Sunday.

More than 2, 000 thousand people from Palestine, Galilee and Jordan in addition to thousands of pilgrims from around the world, as well as cardinals and bishops from the Vatican and the world will be attending the event.

Director of the Catholic Center for Studies and Media, Fr. Rifat Badr, said that during the Mass the general president of the Holy Rosary Congregation Mother Ines al-Yacoub will carry the relics of the new St. Mary Alphonsine Daniel Ghattas.

The relics of St. Bawardy nuns Anna Dppelmas and Ferial Qaraa from Bethlehem and Jocelyn Ferro of the Sisters of Carmel are to be carried by Rizk Bawardi, relative of the Galilee saint.

The upcoming activity in the Vatican comes as strong US evangelical Christian support for Israel continues to face stark contradiction to daily suffering of Palestinian Christians living under Israeli occupation.

Rev. Dr. Mitri Raheb of the Evangelical Lutheran Christmas Church in Bethlehem has emphasized that most Christians around the world were silent during Israel’s 2002 siege on Bethlehem’s Church of the Nativity during the Second Intifada, and continue to turn a blind eye to the Israeli occupation’s impact on the city’s holy sites and Christian communities today.

“The dangerous thing is that the Christian Zionists and the Jewish lobby in this country (U.S.) are entering into an unholy marriage – so to say. The issue is they hate each other but they want to spend time together in the same bed for selfish reasons. Both groups, for their own motives, are not interested in stability and peace in the region,” Raheb says on his website.

Palestinian Christians make up around 8 percent of the Palestinian population in the West Bank, the majority of whom live in the Bethlehem district.

Levels of emigration from Palestine by Palestinian Christians have been increasing, due to commonly high levels of education among community members, but few opportunities to advance due to economic constraints resulting from Israeli occupation.