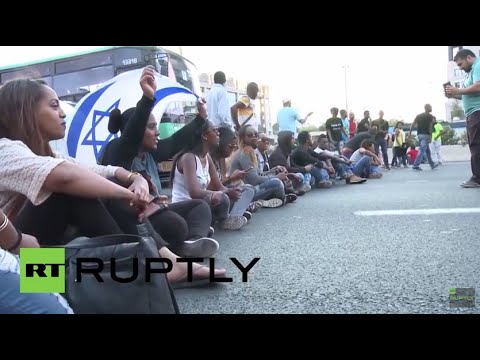 According to reports, marchers blocked highway traffic chanting and bearing signs which read: “A violent policeman must be put in prison” and “We demand full equal rights.”

The protest was sparked by the release this week of a video which shows an Ethiopian-Israeli man in an IDF uniform being beaten by police. Demonstrators are demanding an investigation into the attack and are calling for an end to what they say is an epidemic of brutality against Israel’s minority populations.

During a similar protest in Jerusalem on Thursday night police reportedly unleashed tear gas and stun grenades against demonstrators. As the crowd continued to swell on Sunday, the Times of Israel reported that police are threatening to use force. Police estimate that crowd may grow to 5,000 people.

The outcry in Israel comes amid of wave of protests in the United States which have put a spotlight on police brutality against people of color. Connecting the cross-border problem of systemic racism, people sharing pictures from Sunday’s march in Israel used the hashtag “#BlackLivesMatter.”

There is a live stream of the demonstration and the Times of Israel is maintaining a live blog as the day’s event unfolds.