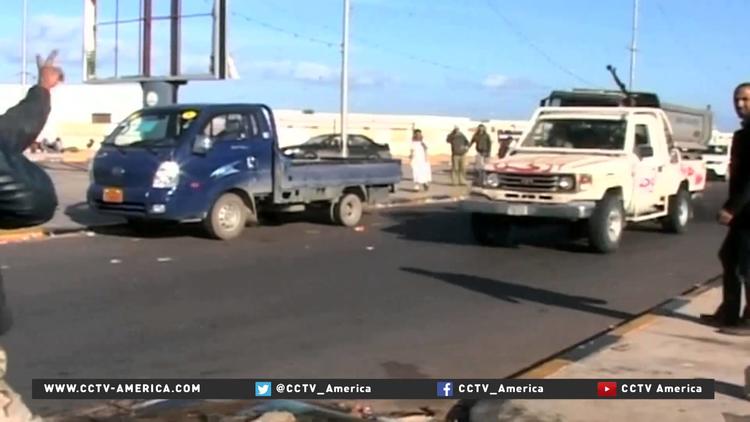 By Ioannis Chapsos | (The Conversation) | –

Libya has been in a state of chaos ever since the fall of its former dictator, Muammar Gaddafi, and the situation scarcely seems to be improving. But it’s not just a nightmare on land – Libya is starting to poison the Mediterranean too.

Since a civil war and UN-backed external intervention put an end to Colonel Gaddafi’s regime in 2011, good order and security have never been restored. Libya remains divided, with continuous clashes between rival militia and two internal “governments”.

The attack against the US Consulate in Benghazi was just one incident in a spiral of unrest.

Italian naval forces are back to conducting search-and-rescue operations in the Mediterranean on a daily basis in order to cope with a massive surge in migrants trying to cross the sea from North Africa, where Libya is the primary transit point. Thousands have died in recent months alone.

But on April 17, they had a very different task: a Sicilian fishing boat had been seized by armed men, 50 nautical miles north of the Libyan Coast, forcing the Italian Navy to board and retake control of the vessel.

And on top of the nascent piracy problem, Libya’s efforts to police its coast are apparently getting more violent.

A Turkish cargo ship was shelled by the Libyan military on May 11 2015, having defied warnings not to approach the port city of Derna; one crew member was killed.

This comes after a Greek oil tanker was bombed twice on January 5 2015 by Libyan air force jets while delivering fuel to industrial facilities off the port of Derna. Two crew members were killed and two more injured in that bombing, which a Libyan military spokesman said was a response to “suspicious” movement and possibly transporting Islamist militants to Derna.

In fact, these attacks are probably part of the two parallel Libyan governments’ struggle for control of the state-owned oil firm NOC, which remains under lax official control since both appointed officials to run the firm and the oil ministry.

The point is not which of Libya’s governments should be in charge. The point is that state fragility ashore inevitably results in maritime insecurities – with all sorts of nasty spillover effects and thorny implications for regional and international security.

The international community in general – and the EU in particular – is ostensibly concerned about the smuggling of migrants from the North African coast to Europe. While they come from a great many countries, most of them depart from Libya, which in turn is clear evidence of the lack of law enforcement ashore.

But the EU’s real fear is the extensive recruitment and popularity of Islamic State and the group’s threats putting European and Italian targets on top of their list.

Above all, it’s worried that the likes of Islamic State could easily exploit this mass movement of anonymous and undocumented people by sea to establish cells in Italy and the rest of Europe.

How not to do it

Back in 2011, analysts expressed their concerns about the likelihood of this scenario and urged the international community to find ways in preventing Libya from turning into the Mediterranean’s Somalia.

Yet despite their warnings, Libya’s maritime problems are following a very similar pattern to Somali piracy, which emerged off the Horn of Africa following the collapse of the federal government in 1991. In so many cases before, state fragility, instability and insecurity ashore have been proven to lead to insecurity at sea; Libya is simply conforming to type.

Search-and-rescue operations and armed interventions are of course tactical options, but the responses we’re seeing try ineffectually to treat the symptoms while doing nothing to address the root causes on the mainland.

The whole Libyan affair is an example of how not to manage military intervention. A solid long-term strategy needs to be put in place before, or at least in parallel with, any decision to intervene against authoritarian regimes or post-revolutionary upheaval. And as part of that, the maritime domain has to be seen, not as a barrier that separates one coast from another, but rather as a medium that connects them.

The Mediterranean has always had a massive geostrategic importance, defined by three choke points (Suez, Bosporus and Gibraltar) for primary sea lanes, with vital importance for international energy and economic security. But the Mediterranean of 2015 is becoming a bigger security challenge than ever.

The EU can’t afford to overlook the desperate security crisis brewing in its own neighbourhood. Now that it’s established a presence to address it in the Indian Ocean, and recognised the need to secure the Gulf of Guinea, it needs to start taking the Mediterranean seriously.